Tech in the Classroom: Is Virtual Reality Likely to Help Learning? 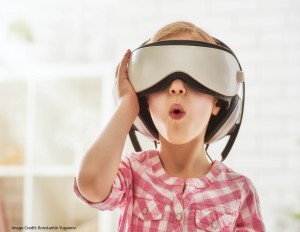 Educators have long hoped that that technology holds great promise to move the educational system away from the 19th century factory model to something more apt for our globalized and digitized society. The internet is rife with articles exclaiming that a revolution is around the corner or that, conversely, the technological advances of our society have not yet transformed schools.

In the past twenty years we’ve seen computers and internet access in schools, digitized white boards, and, recently, one-to-one initiatives with Google chromebooks and iPads. But what have these technological innovations done for learning? Sure, they have increased access to content (think MOOCs), but often they simply move a traditional pedagogical approach onto a computer. Will we ever see a technology that, in and of itself, truly changes the experience of learning?

One technology with intriguing potential is immersive virtual reality (VR). In the commercial world, one of the most exciting technological debuts is that of virtual reality – see the Occulus Rift or Samsung Gear VR. But what immersive technology is actually being researched and developed that could have an impact on student learning? And, most importantly, how will these technologies actually improve learning?

What do we know about VR and Learning?

Sadly, we don’t yet know nearly enough about how virtual reality impacts learning outcomes as compared to traditional, passive presentation methods. This knowledge gap seems to be especially large in relation to building deep, abstract, conceptual knowledge. However, researchers are exploring intriguing possibilities.

“Constructivist” theories of education argue that knowledge isn’t passively absorbed, but actively built through interactive experiences in the world. A 2011 review article by Mikropoulos and Natsis (1) concludes that VR promotes learning by creating this kind of immersive experience.

As science teachers know, limits in our day-to-day lived experiences often create enduring misconceptions. In the documentary A Private Universe (2), for example, filmmakers interviewed recent Harvard graduates and asked them basic questions about the seasons: why, for instance, it’s warmer or colder at certain times of the year. Surprisingly, many of these graduates struggled to move beyond common misconceptions. (Admittedly I would have answered very similarly.)

Although all these young adults had been told how seasons actually work at several times during their schooling, misleading “evidence” from their day-to-day experiences prevented them from absorbing this scientific information.

Similarly, Marilyn Salzman and colleagues (3) argue that misconceptions about Newton’s laws of motion may be partially attributable to the fact that many of the forces at play are unobservable in daily experience.

Mikropoulos and Natsis’s research suggests that VR can help overcome this experiential deficit. With immersive virtual reality, students can transcend physical limitations and directly experience meaningful phenomena. In this TED talk, for example, Michael Bodekaer (4) shows how VR can be used to learn about DNA replication–a sort of “Honey I Shrunk the Kids” learning experience at the sub-cellular level. He also describes how virtual reality technology can expose students to high tech (and prohibitively expensive) lab equipment and experiments through engaging simulation.

With VR, neuroscience students might virtually experience the release of brain chemicals, and observe the process of synapse formation firsthand. In other disciplines, students could be virtually transported to a historical site or museum that they wouldn’t otherwise be able to visit.

Interestingly, Chris Dede (5) builds on the idea of the experiential benefits of virtual reality in talking about transfer; because virtual environments allow for interaction and are, ideally, similar to real-world environments, skills and knowledge may be more likely to transfer to real world settings than in a passive classroom experience.

Dede also argues that virtual environments allow students to seamlessly switch between different spatial perspectives, providing a deeper understanding of the phenomenon at play. In “NewtownWorld”, a virtual reality project about Newton’s laws of motion, students are able to both observe a ball in motion from a third person perspective and also take on the perspective of the ball itself. In his study, students who experienced this perspective-switching feature found it to be motivating.

Unlike traditional 2D classroom presentations (pictures, charts, diagrams), VR can provide a 3D, interactive, multisensory experience that may lead to deeper learning. Because of this sensory immersion, students are led to feel that the digital simulation is an authentic experience, eliciting the similar emotions and thoughts as if they were actually in that environment.

Just like navigating and interacting with objects in the real world, immersive VR can provide sensory feedback in the form of vibrations or other forces, and this feedback can help make the learning experience seem more real. Salzman and colleagues2 point out that using haptic (touch) cues to navigate through a multisensory virtual environment could improve learning and memory. They also suggest that this type of experience can improve students’ motivation, enjoyment, and attitudes about learning.

The Social Future of Virtual Reality in the Classroom

As exciting as the technology of virtual reality is, we clearly need  more experimental research on its effectiveness for different learning goals. It is telling that the Mikropoulos and Natsis literature review discussed above, which considered VR research over a 10-year period, only found 53 studies.

A recent article by researcher Pierre Dillenbourg (6) highlights an important trend in learning technologies: they are becoming more social. This trend is interesting to think about in the context of virtual reality and digital technologies. I initially had the impression that VR in the classroom would lead to social isolation, with students exploring their own, unique simulated world, not paying any attention to their classmates.

I think many of us can think of examples from our lives that echo this concern. As a native new yorker, one of the most comforting experiences is traveling on the New York City subway system when I am home for the holidays. It is truly a special experience, interacting and existing within a rich range of human life.

Recently, however, the transportation authority has introduced underground cellular service. Combined with the rise of tablet computers and smartphones, I see many travelers (myself included) completely immersed in their devices, oblivious to others. In this state, they could be anywhere in the world, missing the serendipitous interactions that provide rich detail to our lives.

Would virtual reality introduce this kind of detachment and social isolation to the classroom? One of the lines of research in virtual reality and learning involves “multi-user virtual environments” (MUVE) (7). These environments allow students to interact with computerized representations of other human participants. In the platform River City (8), students can chat and interact with their classmates while investigating the environmental impact of pollution. MUVE technology adds an interesting social dimension that should be explored in future research.

The Next Big Thing in Education?

Will the next revolution in school be virtual reality? It’s far from clear what the answer to this question is. Although access to VR technology may well increase, research on learning processes and outcomes is not substantial enough for schools to make these types of decisions. VR will be an extremely interesting area of research and innovation to watch in the coming years; I will certainly be keeping my eyes peeled!

PREVIOUS
The View from the Podium