The Runaway Species: How Human Creativity Remakes the World by Anthony Brandt and David Eagleman 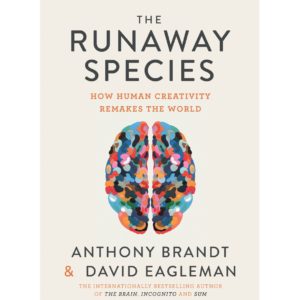 Humans are driven to create and innovate. In fact, this drive is what fuels our success as a species. Anthony Brandt, a musical composer, and David Eagleman, a neuroscientist, partnered to co-author The Runaway Species: How Human Creativity Remakes the World. In it, they argue that it is human to engage in “what-if” thinking. The show that creativity is shaped by culture and time period. Across domains—the arts, business, science—we innovate by breaking, bending, and blending what already exists, taking risks, engaging in the social side of creativity, and generating lots of ideas, even if many ultimately are discarded. Finally, they suggests applications of these principles of creativity to the boardroom and the classroom.

Familiarity can feel comfortable, but too much of it leads to boredom. The challenge is that newness becomes normalized. Indeed, our brains show suppressed activation to stimuli upon repeated exposure. As such, we are constantly driven to innovate, to find the next new idea to stimulate us. The process of innovating requires a balancing act. We balance exploring new ideas with exploiting strategies that we already know work. We balance using what already exists with making improvements to it. We balance desirable novelty with outlandish novelty.

Brandt and Eagleman argue that most innovation occurs through breaking, bending, or blending. Breaking describes the process of taking apart something formerly whole and assembling the pieces in a new way. We engage in breaking every time we use abbreviations, acronyms, or synecdoches. Innovation can arise from bending—making a variation on a common theme, or reinventing a classic work. Blending occurs when we weave together disparate knowledge to create something new in this mixture. The extent to which any of these modes of innovation are seen as creativity is shaped by one’s cultural milieu. Because creativity depends so much on public reception, artists are rarely lonely, isolated figures, even though they are depicted as such in media. Innovators take great risks to depart from the norm. In order to gauge the success of those risks, they need feedback. As such, creators are social by necessity. Another myth about the creative process is that it happens after a flash of insight causes one to perceive a new idea. In reality, creativity comes from generating a myriad of ideas, each of which is a variation or combination of ideas that preceded it.

As our economy evolves, especially with increased atomization and emerging technologies, creativity and cognitive flexibility will become increasingly critical. Schools and companies can be the perfect environment for fostering individual’s creativity and capitalizing on the benefits thereof. Too often, however, they stifle creativity. Companies, Brandt and Eagleman advise, should be versatile and diversified in the ideas and projects they support. While the means to enhanced creativity in the workforce will continue to change (e.g., open-office plans are not a panacea), building a corporate culture that flexibly changes routines and incentivizes new ideas may be the best recipe for innovation. Similarly, schools should create assignments in which students need to generate a variety of solutions to real-world problems and determine new ways to find solutions. Schools should motivate students to stick with challenging problems, praise their effort rather than results, and invest in arts education. Brandt and Eagleman emphasize that we all have enormous potential to be creative, and thus we need to invest in everyone’s development, and not discriminate based on assumptions about which gender or other identity group is most likely to contribute.

With illuminative examples of creativity across fields, Brandt and Eagleman, effectively explain why creativity is so important to human success and advancement, how we make creative products, and what practices we can implement to enhance creativity. To read additional works by Eagleman read our review of his book The Brain: The Story of You.