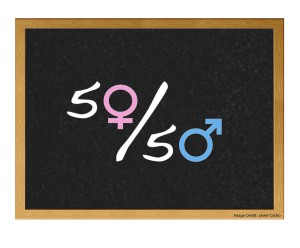 The journal Intelligence recently published an interesting study [1] analyzing gender differences in cognitive abilities in the US and India.

The question hovering in the background is—as it so often is—“are there innate gender differences in cognitive abilities?”

That is: we have lots of data showing gender differences in various measures of academic success; are those differences inherent in genders, or are they socially created? Or, a combination of both?

To answer this question, you might look at the very best performers in—say—math. If there are substantially more boys in the top 5% of math scorers, and if that substantial difference persists over time, then you might think that–all other things being equal–boys are innately better at math.

This study, however, shows that the difference has shrunk in the last twenty years—in both the US and India. If gender differences in math are innate, then these results are a shocker.

Of course, other readers might see this study reinforcing a theory of innate gender differences.

In my view, this study tends to confirm the hypothesis that social forces exaggerate—and perhaps create—gender differences in academic performance.

Reasons to be cautious when interpreting this article—and this blog post:

If you’re especially interested in this topic, Lisa Damour—Director of Laurel School’s invaluable Center For Research on Girls—has produced many evidence-based summaries that can be helpful to your thinking.