Can You Reduce Stress by Writing About Failure?

Here’s a counter-intuitive suggestion: perhaps we might reduce stress by writing about failure. 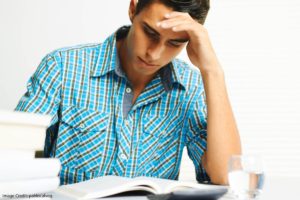 After all, it seems logical to think we could reduce stress by writing about puppies, or our favorite grandparent, or a happy holiday memory.

But: writing about failure? Wouldn’t that just add to the stress?

Earlier research has shown that we can reduce stress by writing.

For example, Ramirez and Beilock placed students in a high pressure academic situation. Each student had to take a difficult math test. Even more stressful, another student’s reward depended on their score.

Half of these students had ten minutes to sit quietly. The other half used their ten minutes “to write as openly as possible about their thoughts and feelings regarding the math problems.”

You might think that this writing exercise would ramp up the students’ anxiety levels. However, it had the opposite effect. Students who had the opportunity to write about their anxiety then felt less anxious.

In fact, when Rabirez and Beilock tested this method with 9th graders taking a biology exam, they found it improved their final scores. (This effect held for the more anxious students, but not the less anxious ones.)

In a just-published study, Brynne DiMenichi and colleagues found that writing about a prior failure reduced stress and improved attention.

DiMenichi’s team asked some students to write for ten minutes about a “difficult time in which they did not succeed.” (Students in the control group spent ten minutes summarizing the plot of a recent movie they had seen.)

They then asked these students to talk extemporaneously in a mock interview for their dream job; they were told they’d be evaluated by a “speech expert” while they spoke. To add to this devilish stress test, they then had to solve math problems in their head. (When they made mistakes, they had to start over at the beginning of the sequence.)

Sure enough, as they predicted, DiMenichi & Co. found that students who wrote about a prior failure were less stressed as a result of this exercise than the students who had summarized a movie.

That’s right: writing about a prior failure reduced stress.

Did that reduced stress benefit these students?

As you can imagine, this test requires both attention and inhibition. Once I’ve gotten used to pressing that space bar, I’ve got to restrain myself when I see a vowel.

The students’ stress levels made a big difference.

Students who had written about failure–and who therefore felt less stress–averaged roughly 7.75 mistakes on this test.

We all know students who need some stress reduction in their lives. And, we’ve all heard different ways to get that job done.

These studies, and others like them, suggest that this counter-intuitive strategy might well be helpful to the anxious students in our classrooms. If students can off-load their stress onto paper, they’ll feel less anxious, and be more successful in their schoolwork.

The best way to make the strategy work will depend on the specifics of your situation: the age of your students, the school where you teach, the personality you bring to the classroom.

I myself would be sure to explain why I wanted my high-school students to do this assignment before I asked them to give it a try.

If you attempt to use this approach, send me an email and let me know how it goes: [email protected]

PREVIOUS
“Not Just a Decadent Luxury”: The Powe...