Pointing Out Online Mistakes Like a “Jerk”: More Misuses of Psychology Research 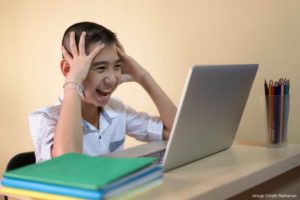 On the one hand, they want to capture the gist of the article. On the other hand, they really want you to click the link.

I thought about this puzzle when I read this recent headline:

People Who Point Out Grammar Errors Online Are Pretty Much Jerks, Study Finds

That’s an arresting claim. After all, the word “jerks” doesn’t often appear in psychology research papers…

So, what does this particular study say? Are people who “point out” online grammar errors “jerks”?

Researchers Boland and Queen asked themselves this question: does someone’s personality profile influence their response to written mistakes — such as typos or grammar errors?

(By the way: it would seem odd if the answer were “no.” If there is such a thing as a personality profile, shouldn’t it capture — among other things — the way people respond to one another’s errors?

But, in the field of psychology, we don’t just assume things. We research them. That’s what Boland and Queen do here.)

Some of the responses were error free. Some included typos: “maybe we would mkae good housemates.” Some included grammatical errors: “If your someone who likes to play tennis…”

Participants then evaluated the authors of each paragraph. They also filled out a personality survey measuring “the big five” personality traits: openness to experience, conscientiousness, extraversion, agreeableness, and neuroticism.

So, here’s the research question: did their personality traits predict their responses to grammatical errors and typos?

The answer is: a smidge.

Well, on average, people with lower agreeableness scored an error-free message as a ~4.2. But, they rated a message with two grammar errors as a ~4.0

On a 7 point scale, does that 0.2 difference really matter? It was statistically significant. But, the researchers’ methodology makes it hard to evaluate the difference.

Method B might be “better” in a way that’s statistically significant. But, it’s honestly not significant in the way that you and I use that word. If, for instance, method B takes 3 times as long as method A, that extra 0.5 point almost certainly wasn’t worth it.

So too in this case. The less agreeable folks might, on average, give lower ratings. But, 0.2 points hardly seems like a big enough deal to worry about.

So, Are People Who Point Out Online Grammar Errors Jerks?

First: NO ONE POINTED OUT ANY ONLINE GRAMMAR ERRORS. It just didn’t happen.

It does not show that people who comment on grammar mistakes have lower agreeableness scores.

And it certainly does not show that this particular person who just commented on a post has a low agreeableness score.

Those questions are related, but different. And, the differences really matter. Especially if you’re going to call someone a jerk.

When you see a headline like “Science Shows Group X Are Jerks,” have confidence it’s a wild overstatement.

So, when “science says” that …

“This one habit will change your classroom forever.”

…follow up with the underlying research. See what the research says specifically. Decide whether or not it works for you and your students.

I’m honestly hoping that this article includes either a typo or a grammatical mistake. If it does, please point it out to me. I promise I won’t think you’re a jerk…

NEXT
Learning How to Learn: How to Succeed in School Wi...