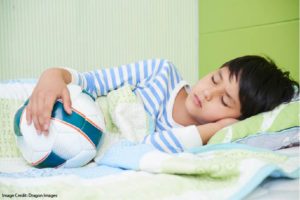 If you teach teenagers, you almost certainly want to know the answer to that question. Whenever I talk with adolescents about brains, it’s one of the first questions I get.

On the one hand, we’ve got plenty of research showing that naps boost learning.

If I give you a list of words to study, you’ll remember more of them after a nap than you would if you hadn’t taken that nap.

In one study, for example, Olaf Lahl found that

“An ultra short period of only 6 min of napping is already sufficient to significantly boost declarative memory performance beyond waking control levels.”

But wait: there’s a problem.

We know that good night-time sleep is essential for consolidation of long-term memories. (Here’s a great article on the subject.)

It seems plausible to me that an afternoon nap might feel good at the time, but might make it harder to sleep at night.

If that’s true, then the short-term benefit of the nap will be more than offset by the long-term detriment of a bad night’s sleep.

This uncertainty has always held me back from recommending naps.

Researches in Jintan, China looked at the cognitive results of napping — and their method fixes this research problem.

They gathered nap and night-time sleep data from 363 6th graders. And, they tested them on a variety of cognitive functions: executive control, spatial memory, and complex cognition among them.

Yup: naps didn’t make it harder for these 6th graders to sleep. In fact, they slept better.

They also did better on tests of non-verbal reasoning.

In brief: frequent naps don’t make it harder to sleep at night, and they do improve some cognitive functions. Win win!

First, the data on sleep come from self-reports. This method, alas, allows for participants’ faulty memory to skew the results.

Second, the study took place within a particular cultural context. Naps are a cultural norm in China. That norm just might have an influence on the relationship between napping and cognition.

(To think more about the important of context, consider the perils of WEIRD neuroscience.)

For me, this study’s specific findings about cognitive capabilities are interesting. However, its general finding that naps don’t interfere with nighttime sleep means that the other studies about naps’ benefits can be taken at face value.

PREVIOUS
Look Here Not There: The Limits of Psychology

NEXT
3rd Graders Beware! The Perils of Mindfulness Rese...