When Multitasking Helps (And Why Teachers Should Discourage It Anyway)

We all know that multitasking is baaaaad.

In fact, we all know that multitasking doesn’t happen. Instead, when we think we’re multitasking, we’re actually switching rapidly back and forth between two tasks. (Or, heaven help us, more than two tasks.) 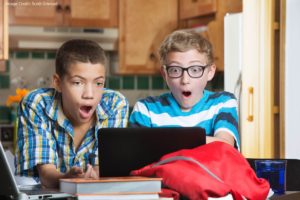 If either of those two tasks is cognitively complex, this rapid task switching imperils performance.

So, to repeat: multitasking is baaaaad.

But what if, under unusual circumstances, it were beneficial?

More precisely, what if the perception that I’m multitasking improves my performance.

Here’s how you might test such a question (especially if your name were Shalena Srna):

Tell half of them that they’re doing two things: learning by watching, and also transcribing.

Tell the other half that they’re doing one thing: learning by watching and transcribing.

In other words, both groups of students do the same thing. But: one group thinks they’re multitasking, and the other doesn’t.

Sure enough, in this study, students who thought they were multitasking did better. They wrote more words, and they remembered more of the video.

Srna and company didn’t stop there. They kept testing their hypothesis.

In another study, they asked students take a virtual art-museum tour. They told half of them that this required distinct tasks (listening and looking); the other half didn’t get that instruction.

In another version, they had participants solve two kinds of puzzles simultaneously: word searches and anagrams. Rather than tell half that the puzzles required dual-tasking (or not), they asked participants what they thought.

Here again, those who spontaneously thought they were multitasking did better on the puzzles than those who didn’t – even though they were all doing the same task.

In Search of an Explanation

Srna & Co. suggest one plausible explanation. If I think I’m multitasking, then I might concentrate harder on the task.

To test their hypothesis, they measured participants’ pupil dilation when they did (or didn’t) think they were multitasking. (We’ve got good research showing that people who are more engaged in material have greater dilation.)

Sure enough, people who believed they were multitasking had bigger pupils than those who did not.

In fact, they rated themselves as less bored by the work they were doing.

This research strikes me as a) fascinating, b) thorough and thoughtful, and c) a smidge dangerous.

Here’s what I mean.

Given these (highly persuasive) studies, we might be tempted to tell our students that they’re multitasking when they’re not – because their extra level of concentration will improve their learning.

Alas, such a response would mistake research benefits for school benefits.

In this case, if we tell our students that they’re multitasking, good things might happen in the short term. However, in the long-term, they get the message that we think it’s okay.

But, it isn’t. Rapid task switching reduces learning. It really does.

In fact, students get counter-productive, pro-switching messages all the time. We need to work against this cultural programming.

(One key strategy: they should see us conspicuously refusing to multitask. Hard-core monotasking adults are great role models.)

Srna and Co. begin their article with some amazing statistics. According to their survey, 84% of people think they’re better-than-average multitaskers. In fact, almost 50% say they’re tops in the field.

NEXT
Everything You Wanted to Know About Sleep, in 20 M...