Mind in Motion: How Action Shapes Thought by Barbara Tversky 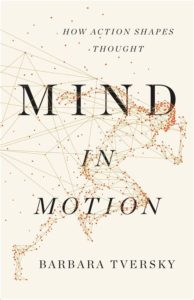 Mind in Motion: How Action Shapes Thought is the recent book by Barbara Tversky, an emerita professor at Stanford University, a professor of psychology at Teachers College at Columbia University, and a past president of the Association of Psychological Science.  In this book, she argues that spatial thinking is the foundation of all thought, including abstract thinking. Tversky draws on nine general principles of cognition to show how we think about space and movement and how we use them to think. Among these principles are the ideas that: with cognition there are always trade-offs; action models perception; minds can override perception and impute missing information; and cognition mirrors perception. She suggests that when there are too many thoughts to hold in mind, we put those thoughts into the world in various ways, and the way we put ideas into the world is similar to how the ideas are stored in our minds.

Tversky’s bold foregrounding of spatial thinking will be of interest to individuals who study and attempt to shape thinking, such as educators and psychologists, as well as to individuals who think in space and movement for their work such as chemists, designers, architects, and dancers. She argues that actions in space allow us to integrate information from our senses and to understand the thoughts and intentions of other people so that we might mimic, coordinate, and cooperate with them. In social situations, verbal thinking often falls short relative to visual thinking.

For example, generally we are better at visually recognizing faces, emotions, and scenes, than we are at describing them. Gesturing is one example that Tversky offers of the power of action for supporting thinking. Gestures can express ideas more directly than words and can do so in a way that forces abstraction. How we gesture can reveal how we think about the relation among ideas (e.g., people’s gestures about time reveal the linear and sequential way we think about events). Further, when people are unable to gesture they have more difficulty describing ideas verbally.

The primacy of visual representations is evident in our linguistic history. Visual representations of ideas predate written representations of ideas by thousands of years. For example, it is widely accepted that “see” means “understand” and “look” means “pay attention to.” The way we visually represent ideas or relationships (e.g., with maps, sketches, diagrams, and comics) often distorts those ideas or relationships so that the most salient parts are emphasized and less important parts are excluded. Tversky argues that diagrams and pictures can be very helpful for learning ideas since they can communicate quickly and directly, and can express more than one meaning.

Relatedly, drawing ideas can aid understanding by making the ideas more concrete and promoting coherence and feasibility within parts of the idea. Spatial thinking, which includes creating physical or mental representations and engaging in mental rotation, is related to mathematical ability. Teaching spatial thinking, which can be accomplished in a variety of ways, including for example, through sports, could help to support youth’s math performance.

Tversky reviews what various visual symbols, including dots, lines, arrows, boxes, and certain diagrams, reveal about how we think about a range of topics. She asserts that the way we reason about space, perception, and action is the backbone for how we reason about social, emotional, scientific, philosophical, and spiritual issues. She argues also that while assuming different perspectives can slow the process of coming to understand something, it will ultimately result in a fuller understanding and more creative problem solving.

Tversky concludes by introducing the intriguing concept of “spraction,” which posits that actions in space design our world and create abstractions in the mind. Readers will understand from Mind in Motion that in considering how to augment cognition, we should rely not only on language but also on spraction.

PREVIOUS
Retrieval Practice is GREAT. Can We Make It Better...