Do metaphors make learning a piece of cake? 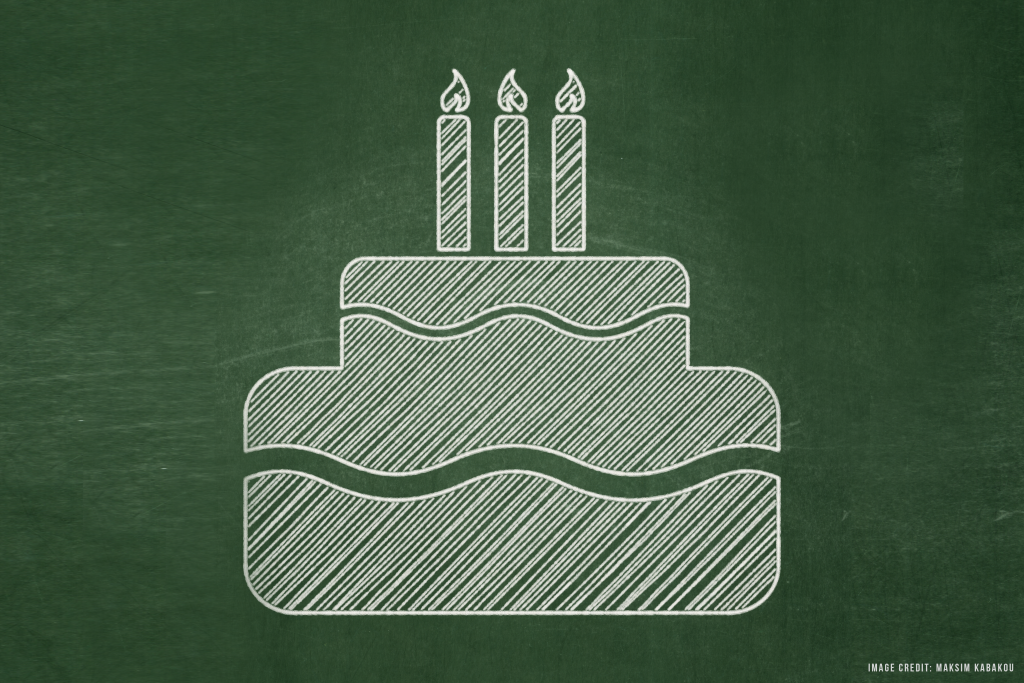 At first glance, metaphor and science might seem to inhabit opposite ends of the things-we-learn-in-school continuum. We usually learn about metaphor through lessons on works like Langston Hughes’s Life ain’t been no crystal stair, and we associate science with topics like crystallization, the process of transferring a liquid to a solid. But metaphor is a mischief that doesn’t like to stay confined to the language arts classroom. It lurks in political discourse (the wealth gap), in music (you ain’t nothin’ but a hound dog), and – you guessed it – in education.

Analogies link two topics in order to bring attention to some of their commonalities, and metaphors are one way of using analogy in language. In most cases, metaphors describe a more novel target, an abstract concept that we can’t see, touch, or experience physically, by linking it to a familiar source concept, something more concrete that we do have experience with. For that reason, it might not be surprising that we often draw on real-world experiences to describe complex scientific concepts. The domain we’re drawing from is often called the source, while the domain we’re trying to explain or understand is the target. We describe molecules as excited when they have a lot of energy, and we learn that when they’re attracted to other molecules, they often form bonds. Whether these descriptions were intentionally metaphorical or not, our language to describe electron dynamics borrows heavily from the language we use to talk about human interactions, a context we’re much more familiar with than subatomic particle behavior. Once you start paying attention, metaphors seem to be everywhere: People who have diabetes are often told that insulin is the key that unlocks their cell doors. And the ozone layer is often described as a blanket that protects the earth. And DNA is often referred to as a blueprint or a recipe. Are these just convenient ways of talking? Or do the linguistic metaphors we use shape the way we think about the complex topics they describe?

Metaphor shapes thought
A growing body of research suggests that we don’t just use metaphors to talk; we use them to think as well. In a series of experiments by Paul Thibodeau and Lera Boroditsky1, people read either that crime is a “wild beast preying on” or “virus infecting” the city of Addison (a fictional city). They then read some fake statistics, like “In 2004, there were 330 murders in the city, in 2007, there were over 500,” and they were asked what they thought Addison should do about the crime. People’s proposed solutions differed systematically depending on the metaphor they read earlier to describe the crime. Those who read that crime was a beast tended to make suggestions related to containing it and enforcing penalties, things people would probably suggest if an actual beast were loose in the town. The virus readers, on the other hand, were more likely than the beast readers to suggest that the city find the root causes of the crime problem and remedy those, in line with how they would likely eliminate a literal virus. People were still swayed by the metaphor even when they were given options to choose from instead of generating their own solutions. This work shows that the metaphor people encounter for a topic as complex as crime can influence the way they reason about it.

Metaphors in the classroom
How might metaphors affect students learning about complex topics? Since metaphors usually describe intangible ideas or processes by referring to things we actually have experience with, teachers often feel that they are an effective way to teach. In 1983, Dedre and Donald Gentner investigated this intuition more closely2. They noticed that there are two common analogies for teaching electricity. The first is the water-flow analogy: just as water flows through pipes, electricity flows through the wires of an electrical system. The second is a moving-crowds analogy: the flow of electricity through the wires can be seen as similar to a crowd of mice running along an enclosed track.

Although both analogies demonstrate the gist of electricity flow, there are other features of electricity that they make less obvious. For example, what happens when multiple resistors are introduced in an electrical circuit? If it’s a series circuit (meaning that each component is connected in a series), the result will be different than if it’s a parallel circuit (meaning that the current divides in at least two paths before completing the circuit). The image below gives an example of each type of circuit. 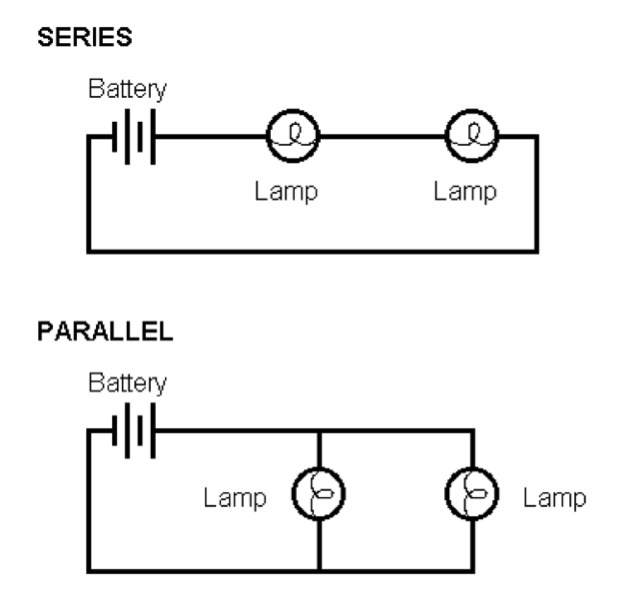 If a student is thinking about the circuit as similar to water pipes, every blockage (created by a resistor) might seem to affect the circuit in the same way since all blockages slow flowing water down. However, this is not the case with electricity; in the case of a parallel circuit, more resistors actually create more current. Consistent with this idea, people who used the water-flow model to think about electricity were less likely to understand resistors than those who thought about electricity as moving crowds. The moving-crowds analogy was not a conceptual panacea, however: people using that mental metaphor had more trouble with questions about the effects of including multiple batteries in the circuit. This is likely because it’s not clear what the batteries in the circuit are analogous to in the moving mice model. In the water model, however, the battery’s analog is much clearer – it corresponds to a reservoir. This work shows that the metaphors used to teach complex concepts have consequences, both helpful and misleading, for how students understand the phenomena they describe.

Metaphor abounds in education about the brain as well. Because we can’t see or touch the brain and definitely can’t see or touch the many dynamic processes occurring within it, metaphors make neuroscience more tangible. The brain is frequently compared to a computer when we want to emphasize its ability to take in information from the world, “process” it, and behave accordingly. It’s a muscle when we want to emphasize our ability to change what we know and how we think. Metaphors are used to talk about the different parts of the brain, too. Neurons are often described and diagrammed as tree-like (which is the meaning of the Greek root in dendrite!), and neurons’ dynamics are almost inevitably talked about in terms of human communication. Neurons are seen as messengers that send and receive the messages underlying all cognition. And once those messages arrive at the frontal lobe – the area most known for its involvement in higher-level thinking like decision-making, inhibition, and rational thinking – we often say that they have reached the brain’s control center. In many cases, these metaphors shed light on the complexities of the brain that are far from our direct experience, but it’s important that we also keep in mind the hidden inferences each might contain about how the brain really works.

Effective metaphor use
Although metaphors can open doors to many useful insights, they can also encourage misunderstandings if students make unintended links between the source and target domains. The solution for avoiding these misleading inferences is not to abolish metaphor from the classroom completely. Not only would that be nearly impossible, but it would also bar us from the helpful insights that metaphors do foster. In addition, some research shows that metaphors can evoke more emotional responses in the brain (specifically, more amygdala and anterior hippocampus activation) than literal sentences containing the same content3. Since emotional stimuli tend to be remembered better than unemotional stimuli4, it’s an open question as to whether metaphor can help students learn by tapping into emotional cognitive resources.

Although it is difficult to provide advice for metaphors that will hold for all students, subjects, and topics, Benjamin Jee and colleagues have articulated some general guidelines that educators can follow to ensure that their analogies are as effective as possible5:

● Make sure that students can explicitly map the features of the analogy (a blueprint, for example) to the new concept (DNA). Instructors may first need to explicitly point out the mappings in order for the students to make the connections
● Acknowledge the incorrect inferences that students might make. Point out the ways in which DNA is not like a blueprint, in addition to the ways that it is.
● Keep the metaphorical source available. While explaining the ways that the analogy extends from one domain to another, keeping the source present helps students focus their mental energy on connecting the topics, instead of working to recall the example at hand.
● Introduce more similar source-target pairs before expanding to metaphors that have fewer surface similarities. The more similar the features are of the two concepts being compared, the easier it will be for students to extrapolate the conceptual similarities that the metaphor aims to highlight.

Instead, we might be better off adopting an everything in moderation mentality, a mentality that we strive to apply to many of the great things in our lives. When we indulge in a piece of chocolate cake, we savor it as something rich and satisfying. But we know that a diet consisting only, or even primarily, of chocolate cake would be harmful, so we try to balance our cake consumption with other foods. We can think of our metaphors in the same way: they’re worth savoring, but if consumed with reckless abandon, they may clog up our figurative arteries and prevent us from deep understandings.

PREVIOUS
Overloaded and Underprepared: Strategies for Stron...
NEXT
The Problem with Believing in Innate Talent