Learning Grows: The Science of Motivation for the Classroom Teacher 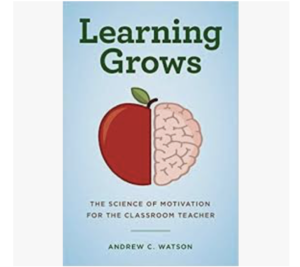 Andrew C. Watson, the editor of Learning and the Brain Blog, long-time teacher at some of the country’s most prestigious schools, and consultant to educators around the world, recently released his second book in the Learning Brain series. While the first book in the series focused on working memory and attention and the final book in the series will focus on long-term memory, Learning Grows: The Science of Motivation for the Classroom Teacher focuses on growth mindsets and stereotype threat. Watson synthesizes the vast research on these two topics in a comprehensive and comprehensible manner. He recognizes that teachers are experts in motivating others. As such, he offers helpful, innovative, research-backed motivation strategies that teachers might employ to reduce the impact of societal stereotypes on students’ performance and help students learn to try harder after setbacks.

Interestingly, psychologists have found that moderate difficulty when initially learning a topic can lead to greater understanding and better long-term retention. Unfortunately, some students, regardless of intelligence, do not respond to difficulty by becoming eager to work hard and learn more; instead, some students feel embarrassed or angry when learning feels difficult, and they may give up. Since the 1970s Carol Dweck has been examining students’ explanations of difficulty and the implications for effort and success in school. She and others have found that students who believe that intelligence can increase with effort are likely to work harder. Ultimately, they perform better in school than students who believe abilities are fixed. Watson explains that neuroscientific evidence has corroborated the existence of growth and fixed mindsets by demonstrating that while people with growth mindsets activate areas of the brain that support cognitive processing when they are learning after mistakes, people with fixed mindsets activate error detection areas.

For teachers one important implication of this work is that feedback educators give students shapes how they interpret future successes and struggles. When we provide feedback about students’ learning strategies and effort, rather than about innate qualities of them as students (e.g., when we praise with verbs rather than nouns), we signal that learning is a process and with dedication students can continue to achieve higher levels of success regardless of their current skills. Watson encourages teachers to normalize the experience of struggle in school by, for example, discussing previous students’, famous people’s, or the students’ own previous struggles and ultimate successes.

Watson says that we should minimize the consequences of both correct and incorrect answers to questions. Teachers might even acknowledge that they have made a mistake by wasting students’ time if they ask the students to do work that the students can complete flawlessly. Grading policies can also signal a growth mindset classroom culture. Watson recommends policies such as allowing students to set their own deadlines and revise graded work for credit, emphasizing feedback more than grades, and weighting later assignments more heavily than earlier ones. Additionally, exposing students to the idea that they can contribute to the development of new knowledge shows them that people at every stage need to be learners and that knowledge is dynamic.

While an individual’s mindsets can shape his performance in school, so too can his perception of the beliefs of others about his ability to perform. Claude Steele coined the term “stereotype threat” in the mid-1990s to describe how making salient a stereotype-relevant part of an individual’s identity, during a difficult task, in a domain that the individual cares about, can cause the person to perform worse on the task. The fear of confirming the stereotype can make the individual hypervigilant, stressed, and distracted, and it can reduce his working memory.

Watson highlights research that has shown that reducing the salience of stereotyped identities, highlighting non-stereotyped or positively-stereotyped aspects of identity, affirming one’s values and sense of belonging, and reattributing feelings of stress to external sources (rather than doubts about others’ perceptions of oneself) can reduce stereotype threat effects. Additionally, teachers can reduce stereotype threat effects during testing by reframing tests as opportunities to learn, structuring tests to start with sections where students have strengths, and prefacing critical feedback with a message of hope about the teachers’ belief in the students’ ability to improve.

The Learning Brain series is an approachable, practical, and informative series for expert and novice teachers alike. It is likely to help all educators better understand and reflect on their practices so that they can grow in their ability to serve students.

PREVIOUS
Design Thinking: How Does It Work In The Classroom...

NEXT
Decorating the Classroom: How Much Is Too Much?