A well-known Education Twitter personality claimed that “cell phones are as addictive as drugs.”

Are they? What should we do when someone makes that claim?

Reposted from November of 2021

I recently read a tweet asserting “the fact that cell phones are proven to be as addictive as drugs.” 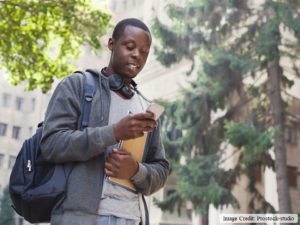 Of course, people casually use the word “addictive” about all sorts of things: chocolate, massages, pumpkin-spice lattes. (No doubt somewhere Twitter is being described as “addictive.” My mother tells me that this blog is addictive.)

But all that casual language doesn’t add up “proving the fact” that cell phones are “as addictive as drugs.” So I started wondering: has this “fact” been “proven”?

Over the years I’ve adopted a simple strategy. When someone makes a factual claim about research, I ask for the research.

In this case, I simply asked the tweep for the research behind the claim.

I’ve been amazed over the years how often people make “research-based” claims and then refuse to provide research to support them.

In this case, he did in fact point toward research on the topic. (I found one website claiming that 16% of adolescents, and 6.3% of the population, are addicted; alas, no sources cited. Happily, they do provide treatment…)

The tweep’s willingness to cite evidence enhances his credibility. Let’s check it out…

So: the tweep’s credibility clicks down slightly.

Good news: All three of the links do, in fact, point to underlying research! I didn’t get a direct connection to the promised research, but I can keep digging to find it.

Credibility clicks back up.

Meh news: it turns out that all three articles point to the same underlying research. That is: I didn’t find three studies supporting the claim that “cell phones are proven to be as addictive as drugs”; I got one.

Now: one study isn’t nothing. But [checks notes] one isn’t three.

This Just In: Correlation Isn’t…

Given how much is riding on this one study, let’s check it out.

First off, we can see right there in the title that the study focuses on correlation. As you’ve no doubt heard dozens (thousands?) of times, “correlation isn’t causation.”

In this case, the authors asked 48 people questions about their cell-phone usage. Based on their answers, they categorized some of those people as “addicted.” And they then found brain differences between the “addicted” and “not addicted” people.

First: one study of 48 people doesn’t “prove a fact.” It might be an interesting data point, but that’s all.

Second: this study doesn’t claim to “prove a fact.” Using a questionnaire, it DEFINES some folks as addicted and others as not addicted.

People who throw the javelin probably have a different “average muscular profile” than people who run marathons, because they’re using different muscles.

People who play the piano probably have different neural profiles than people who dance ballet, because they’re spending more time using THIS part of the brain than THAT part.

It seems likely people who score high on this “cell-phone addiction” questionnaire behave differently than those who don’t; so it’s not dramatically surprising that their brains are different.

One interesting point does jump out. The brain differences found by this research team do — in some ways — align with plausible predictions about addiction.

Now, the researchers don’t make strong claims here: the word “drugs” appears only once in the body of the study.

This finding isn’t a big surprise to me. Very roughly, the  brain differences have to do with “our ability to control what we pay attention to.” It’s not hugely surprising that heavy cell-phone users have brain differences there (and that people addicted to drugs do too).

If the tweep’s study doesn’t support the claim that “cell phones are proven to be addictive,” does other research?

To answer that question, I did a simple google search (“cell phone addiction real”). The first scholarly article that pops up says…not so much.

The behaviors observed in the research could be better labeled as problematic or maladaptive smartphone use and their consequences do not meet the severity levels of those caused by addiction.

As I continued clicking, I found other skeptical reviews (for instance, here), and also found some that embrace the category (with some open questions, here).

Oh, and, by the way: “cell phone addiction” isn’t included in the DSM-5.

I am, believe it or not, open to the idea that cell phones might be addictive. If they are — if at some point research “proves that fact” — then this label might help us treat a real problem effectively.

My objection springs from another source entirely.

I worry when debate about measurable claims sinks to applying insulting labels.

If I think that asking students to memorize is a bad idea, I could study research on the topic. Or, I could dismiss it as “drill and kill.” The insulting label replaces the argument.

If I think that teacher talk is bad, I could study research on the topic. Or, I could mock it as “sage on the stage.” The dismissive label replaces the argument.

If I think that cell-phone usage is bad for teens, I could study research on the topic. Or, I could call it “an addiction.” The alarming label replaces the argument.

If we’re going to rely on research to make decisions about teaching and education (which is, after all, the GOAL of our organization) we should never replace research with labels.

Instead, let’s try something else. Let’s replace labels with research…

NEXT
Remembering and Forgetting in the Age of Technolog...