How Teachers Can Use Neuroscience in Education

I recently saw two very different looks at neuroscience and learning, and I thought they made a useful pairing for this blog. Here goes…

Regular readers know that I’ve recently been exploring research into movement and learning. That is: does walking around – especially outside – help us think, learn, attend, and create? 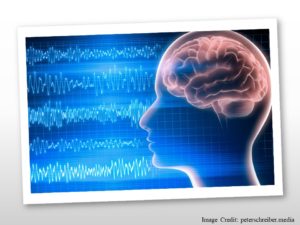 Because I really want the answer to be “yes,” I force myself to be extra skeptical when I look at the research. And even with all that extra skepticism, the answer is – for the most part – YES!

How do we know?

Well, various researchers have people walk around – or sit still – and then do various mental tasks. Often (although not always), they do better after walking than after sitting.

Researchers at the University of Illinois at Urbana-Champaign had several 9 and 10-year-olds take various tests in reading comprehension, spelling, and math.

Researchers also had these students take tests on “attentional control” — which means, more or less, what it sounds like.

Students took these various tests once after sitting still for 20 minutes, and another time after walking at a moderate pace for 20 minutes.

Researchers also hooked students up to an electroencephalography (EEG) array while they took those tests.

EEG measures electrical activity on the outer-most layer of the brain, so – VERY roughly – it shows how various brain surfaces are acting at particular moments in time.

EEGs produce up-and-down squiggles; they look a bit like lie detector tests in the movies.

Research with adults has consistently shown that exercise produces a change at the third squiggle in various brain regions. Because that squiggle (sort of) goes up, it’s called the “third positivity,” or P3.

This P3 (third positive squiggle) correlates with better attentional control in adults. Researchers hypothesized that they would get the same result with these young children.

Changes in P3, induced by walking, took place when the students did better at attentional control.

So, why does this research finding matter?

Now we know: they do!

In the field, we call this pattern “converging evidence.” Two very different kinds of research — psychology AND neuroscience — support the same conclusion.

Now we can be even more confident that walking benefits cognition – even though, as you remember, I’m trying to be extra skeptical.

So, here we have the FIRST way that teachers can use neuroscience to support their teaching:

After psychology research suggests that a teaching suggestion might be beneficial, neuroscience can provide converging evidence to make this idea even more persuasive.

FANTASTIC. (By the way: I’ll come back to this study about walking and attentional control at the end of this blog post.)

The Matrix Could Be Real?

I said that I’d seen two articles about neuroscience worth sharing. The first – as you’ve seen – is very specific and researchy.

The second article – pointed out to me by my friend Rob McEntarffer — spends time speculating, musing, and wondering.

Crudely speaking, this article wonders if something Matrix-like could happen. Could Laurence Fishburne ever download kung fu into Keanu Reeves?

The article, in WIRED Magazine, opens with a fascinating scene. Doctors have implanted electrodes in a patient’s fusiform face area – the FFA. (Most neuroscientists think that the FFA helps the brain identify and recognize human faces.)

When the researchers stimulate the FFA, this patient – very briefly – sees human features on a blank box: an ear, a sideways smile, an eye.

In other words, electrical current applied to the brain surface created bits of a face. THE MATRIX EXISTS.

Wait. [Sound of record scratch.] Nope. No it doesn’t.

This article does a great job pointing out all the extraordinary complexities going from this tiny baby step to actually “implanting learning in the brain.”

As in, we are nowhere near being able to do anything remotely like that.

Glitches in the Matrix

The idea itself seems plausible. As Adam Rogers writes:

The brain is salty glop that turns sensory information into mind; you ought to be able to harness that ability, to build an entire world in there.

However, all sorts of problems get in the way.

At a very basic level, there are just too many neurons for us to be able to control precisely — something like 50,000 to 100,00 in an area the size of a grain of rice.

To make anything like perception happen, we’d have to get thousands of those stimuli just right. (Imagine how complex LEARNING would be.)

Perception and cognition are like a piano sonata: the notes must sound in a particular order for the harmonies to work.

The signals you see when a brain is doing brain things aren’t actually thought; they’re the exhaust the brain emits while its thinking.

So, here’s the SECOND way to use neuroscience in teaching:

When teachers understand how fantastically complicated neuroscience — and the underlying neurobiology of thought and learning — truly are, we can see through hype and extravagant claims often made about this field.

Rogers’s article does a GREAT job highlighting that complexity.

I promised to return to that study about walking and attention, so here goes:

I do think that this study offers some converging neuroscientific evidence that movement prior to learning enhances attentional control.

However, twitter post citing this study implied it reaches a different conclusion: movement during learning is good for attention, creativity, etc.

That is: it claimed that teachers should design lessons that get students up and moving, and that this research requires this conclusion.

In particular, it highlights this image to show changes in brain activity between walking and sitting.

Rogers’s article in WIRED encourages us to think about all the neural complexity underlying this blithe suggestion.

After all, that image is simply a representation of a few dozen P3 graphs: 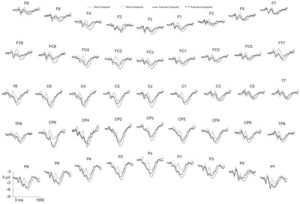 Unless we have a clear idea what those squiggles mean, we shouldn’t be too confident about that image showing “changes in brain activity.”

And, by the way, people are often much too confident in interpreting such images. As in: it happens EVERY DAY.

To be clear: I think some movement during class often makes sense — although, as always, the students’ age and the school’s culture will influence this decision.

And this neuroscience research does provide “converging evidence” that movement built into the school day is a good idea.

But it certainly doesn’t require teachers to have students walking from place to place during lessons; that’s not what the any of these researchers measured, and it’s not what they claim.

If both kinds of research point the same direction, we can be especially confident that a teaching suggestion makes sense.

And a deep understanding of the complexity of neuroscience (a la Rogers’s WIRED article) can help us resist overconfident advice that seems to have (but really does not have) neuroscientific backing.

NEXT
My Detective Adventure: “VR Will Transform E...