How Do Experts Think?

Perhaps you’ve heard the saying: “To a hammer, everything looks like a nail.”

It means, more or less, we see what we’re trained to see. 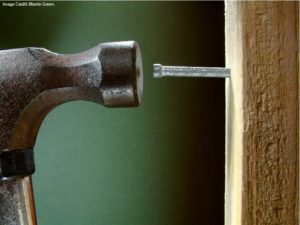 If I bring a problem to a plumber, she’ll think about it like a plumbing problem. An economist, like an economics problem. A general, a military problem.

What does research tell us about this insight? And, does that research give us guidance about teaching and learning?

The Geoscientists and the Balloon

A research team led by Dr. Micah Goldwater wanted to explore this topic.

So, they asked a few hundred people these questions:

Those who answered the question fell into four distinct groups:

Expert geoscientists — who had an MA or PhD in geoscience

Intermediate geoscientists — who were studying geoscience

Non-expert adults — who had not studied science in college

Goldwater’s team wanted to know: how often would people offer causal analogies? “A balloon floating is like hot water rising in a cold sea because they result from the same underlying causal principle.”

Deeper still, they wanted to know how often people offer those causal analogies spontaneously, and how often they need to be prompted to do so. (The research details get tricky here, so I’m simplifying a bit.)

Sure enough, expert geoscientists spontaneously offered causal analogies for the balloon question — because they have a relevant geoscientific rule, called “Archimedes’ principle.”

However, expert vision scientists did not spontaneously give causal analogies, because their branch of science does not include a causally relevant analogy.

And neither group spontaneously proposed many causal analogies for “catching a cold,” because neither field builds on underlying relevant principles.

This finding — along with other parts of Goldwater’s research — suggests this conclusion: hammers typically see nails.

That is: experts spontaneously perceive, contemplate, and understand new information (“floating balloons”) through core principles of their field (“Archimedes’ principle”) — even though balloons don’t come up very often in geoscience.

As I visit schools, I often hear teachers say “I want my students to think like historians” or “think like scientists” or “think like artists.” To accomplish this goal, some pedagogies encourage us to give students “expert tasks.”

Alas, Goldwater’s findings (and LOTS of other research) suggest that this bar might be MUCH too high. It takes years — decades? — to “think like a researcher” or “think like a coach.”

Even people with PhD’s in vision science don’t think causally about floating balloons unless explicitly prompted to do so.

As Dan Willingham writes in Why Don’t Students Like School?, “cognition early in training is fundamentally different from cognition late in training” (127).

All those authentic tasks we’ve been giving students might not have the results we had hoped for. It’s extraordinarily difficult for students to think like a mathematician, even when we give them expert math tasks.

However, I see glimmers of hope in this gloomy conclusion.

My students (I teach high school English) won’t think like literary critics. However, I think they can and do become “experts” in much smaller sub-sub-sub-fields of English. (Warning: I’m about to switch from summarizing research to speculating about a classroom anecdote.)

When Comedy is Tragic

For instance: I recently gave my students a fairly complex definition of “comedy and tragedy.” This section of the unit required LOTS of direct instruction and LOTS of retrieval practice. After all: I’m the expert, and they’re novices.

My students then read a short story by Jhumpa Lahiri called “A Temporary Matter.” I asked them to look for elements of comedy and tragedy in that story.

Not only did they find those elements, they SPONTANEOUSLY pointed out Lahiri’s daring: she uses traditionally comic symbols (food, music, celebration, childbirth) as indicators of tragedy (“death and banishment”).

And, since then, they’ve been pouncing on tragic/comic symbolism, and other potentially innovative uses thereof.

These students aren’t (yet) expert literary critics. But on this very narrow topic, they starting to be flexible and inventive — a sign of budding expertise.

As long as I have a suitably narrow definition, a focused kind of pre-expertise is indeed a reasonable and achievable goal.

Like lots of research in the field of “novices and experts,” Goldwater’s study warns us that experts really do think differently from novices, and that true expertise takes years to develop.

However, that insight shouldn’t scare us away from well-defined tasks that build up very local subsections of developing expertise. Our students are capital-E Experts. And, the right-sized educational goals can move them towards ultimate Expertise.

NEXT
Good Anxiety: Harnessing the Power of the Most Mis...