Have I Been Spectacularly Wrong for Years? New Research on Handwriting and Learning 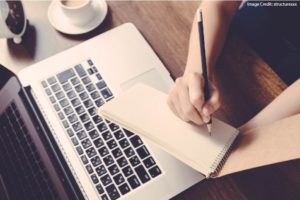 I’m usually an easy-going guy. But if you want to see me frantic with frustration, tell me about the superiority of handwriting for taking notes.

Back in 2014, two Princeton researchers did a study which concluded that handwritten notes lead to better learning than notes taken on laptops.

That’s a helpful question to have answered, and so I read their study with a mixture of curiosity and gratitude.

Imagine my surprise when I found that their conclusion rests on the assumption that students can’t learn to do new things. (That’s a VERY weird belief for a teacher to have.)

If you believe a student CAN learn new to do things, then the researchers’ data strongly suggest that laptop notes will be better.

Oh, and, by the way, their study does not replicate.

Despite these glaring flaws, people still cite this study — and look at me with pity (contempt?) when I try to convince them otherwise. “But research says so,” they say wearily. I seethe, but try to do so politely.

When I try to explain my argument, my interlocutor often says something like “handwriting engages more neural processing through kinesthetic yada yada,” and therefore boosts learning.

In the first place, that’s NOT the argument that the Princeton researchers make. It might be true, but that’s changing the subject — never a good way to prove a point.

In the second place, where is the evidence of that claim? I’d love to review it.

To date, no one has taken me up on that offer.

But — [sound of trumpets blaring] — I recently found a post at Neuroscience News with this splendid headline: “Why Writing by Hand Makes Kids Smarter.”

Here’s the first sentence of the article:

Children learn more and remember better when writing by hand, a new study reports. The brains of children are more active when handwriting than typing on a computer keyboard.

“Learn more.” “Remember better.” That’s impressive. At last: the research I’ve been asking for all these years!

Believe it or not, I rather enjoy finding research that encourages me to change my mind. That process reminds me of the power of the scientific method. I believe one thing until I see better evidence on the other side of the argument. Then I believe the other thing.

So, AT LAST, I got to read the research showing that handwriting helps students learn more and remember better.

Want to know what I found?

The researchers did not test anyone’s learning or memory.

You read that right. This article claims that handwriting improves learning and memory, but they didn’t test those claims.

This research team asked 24 participants — twelve adults and twelve 12-year-olds — to write by hand, or write on a laptop. They then observed the neural regions involved in those tasks.

Based on what they saw, they inferred that handwriting ought to result in better learning.

But they did not test that hypothesis.

So, based on a tiny sample size and a huge leap of neuro-faith, they have concluded that handwriting is better. (And, astonishingly, some big names in the field have echoed this claim.)

Believe it or not, I’m entirely open to the possibility that handwritten notes enhance learning more than laptop notes do.

I’m even open to the possibility that kinesthetic yada yada is the reason.

If drawing boosts learning, maybe handwriting does too. That’s plausible.

But here’s the thing: before Wammes made his claim, he tested the actual claim he made.

He did not — as the Princeton researchers did — start from the assumption that students can’t learn to do new things.

He did not — as this current research does — extrapolate from neural patterns (of 24 people!) to predict how much learning might happen later on.

Wammes designed a plausible study to measure his hypothesis. In fact, he worked hard to disprove his interpretation of the data. Only when he couldn’t did he admit that — indeed — drawing can boost learning.

Before I believe in the superiority of either handwritten notes or laptop notes, I want to see the study that works hard to disprove its own claims. At present, the best known research on the topic conspicuously fails to meet that test.

Do you know of research that meets this standard? If yes, please let me know!

2 Responses to Have I Been Spectacularly Wrong for Years? New Research on Handwriting and Learning

NEXT
The Power of Discord: Why the Ups and Downs of Rel...