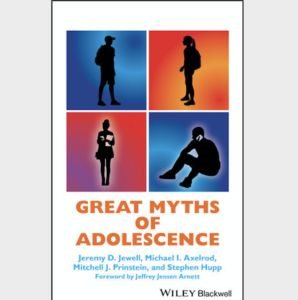 Do you think that teenagers today are lazier, riskier, and more self-absorbed than previous generations? Great Myths of Adolescence by Jeremy D. Jewell, Michael I. Axelrod, Mitchell J. Prinstein, and Stephen Hupp aims to correct that belief. Their book, which will be of great interest to people who study or work with adolescents, defines 50 common myths about adolescence, describes their prevalence, and presents the most recent scientific evidence to correct the myths.

The authors first dispel several myths related to the development of the body, brain, and mind during adolescence. For example, although our laws reflect a standard of adulthood beginning at age 18, many 18-year-olds have not yet assumed adult roles in society and their brains are still undergoing significant change.

One harmful myth about adolescents is that they are likely to engage in risky behaviors.  When adolescents believe that risk-taking is the norm, they often feel compelled to conform to that norm and thus take risks. But adolescent riskiness has been exaggerated. The authors present evidence that adults are more likely than teenagers to use marijuana and very few teens (around 5%) have used hard drugs. They show that life skills training programs can help reduce drug use, while DARE and related programs are ineffective. Notably, more than half of high school juniors and seniors have had sex, and about a quarter of high school freshmen have. Jewell and colleagues argue that comprehensive sex education (not just abstinence education or simulator baby doll exercises) is the most effective for reducing teen pregnancy and risky sex.

Adolescents’ social environment shapes their development. The authors examine several myths about adolescent socialization. For example, as is evident in many iconic teen movies, there is a pervasive myth that popular teenagers are cruel. While there is a kernel of truth to this, in general, popular teenagers are kind, and this quality serves them well throughout life. Teenagers are somewhat susceptible to peer pressure, as many believe, but the practice of conforming to a perceived norm can also be used to encourage teenagers to behave in productive and prosocial ways. For example, given that bullying peaks in middle school, prosocial norm setting could be beneficial.

While many believe teenagers’ “raging” hormones make them especially moody, the truth is hormones explain very little of the differences in mood among teenagers. Teenagers may experience their emotions intensely, but they are also skilled at regulating their emotions.  The belief that teenagers are moody is harmful; it makes parents and other adults less responsive to teenagers’ emotional needs. Both the quantity and quality of time that parents and adolescents spend together is important for adolescents’ emotional development. It is natural for teenagers to spend less time with parents than younger children do but detaching from parents is not necessary to transition successfully into adulthood.  Indeed, teenagers typically prefer to talk to their parents about school- and career-related challenges than to their friends. The teenager-parent relationship strengthens over the period of adolescence, especially when parents are emotionally responsive.

The authors tackle serious issues that adolescents face. For example, although suicide is more prevalent among adults in middle age than among adolescents, it is the second leading cause of death among teenagers. Asking teenagers if they have considered suicide reduces the likelihood of a teen taking his life. The authors report that overall violence in school is not increasing. A final danger for adolescents that the authors address is driving. Most traditional driver’s education courses are not effective. Graduated licensing systems are one measure states, communities, or parents can take to make teenage drivers safer.

The researchers address several lighter issues too. They present evidence suggesting that adolescents are not skilled at multi-tasking, the “freshman fifteen” pound weight gain is an exaggeration, and more teens read for leisure than most people believe.

Great Myths of Adolescence provides a helpful reminder of the many challenges that adolescents face and the exciting opportunities during this transitory period in life.  More compassion for adolescents and less self-righteous critiquing may benefit adolescents, adults, and society.

PREVIOUS
The Best-Known Neural Model of Learning Might be S...