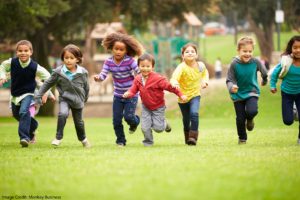 As a teacher, it took me years to get past that belief. (The short version of the story: I had a student who got 100% extra time on tests because her processing speed percentile was in the single digits. When I read her first essay I thought: you could have given any of my other students 100% extra time–they never would have come up with this analysis. She wasn’t fast, but good heavens she was insightful.)

Basically, they used computer-based flashcards to study the word pairs. Then, they went through the pairs and tried to fill in blanks correctly.

If the adults got the right answer, the card was dropped from the deck. If they got it wrong, they could study the correct answer, so they could get it right the next time.

Researchers wanted to know, first, how long did it take them to get all the words in the deck right? That is: how many times did they cycle through the deck before they finished the task?

In other words: how quickly did they learn?

And, second, how well did they do on a test of those word pairs the following day?

In other words: how well did they learn?

As you can see in the graph, the fast learners remembered better. Check out the bottom half of the image below. 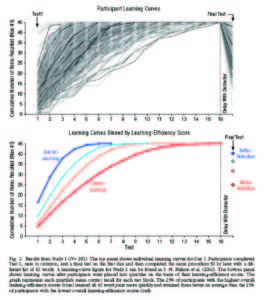 The top 25% learned the words in about 7 cycles through the deck. And, the next day, they remember about 89% of the word pairs. (I’m eyeballing these numbers from the graph.)

The bottom 25% learned the words in about 16 cycles. And, they next day, they remembered about 56%.

If you want to predict how well these adults would remember the word pairs the next day, the best question you could ask would be: “how quickly did they learn those word pairs today?”

And, here’s the crazy part:

4 of these researchers had used the Lithuanian word-pair method in a different study about 3 years before.

They recontacted those participants, and many of them agreed to be retested.

In other words: this is a relatively stable finding. It lasts not from day to day, but over months and years.

First, of course, we’d like to know why this is true? The study’s authors speculate that the fast learners might be better at attentional control. Or, they might have higher working memory capacity. Or, they might come up with better memory strategies.

At present, we just don’t know.

Second, would this finding hold true for other kinds of learning? After all, we rarely want our students to learn foreign-language word pairs relatively quickly. (Even foreign language teachers let students learn vocabulary over time.)

Does this finding matter for other kinds of learning?

Third, is this true if we test students’ memories more than a day later. In both halves of this research, participants learned words one day, and the final test was the next day.

What would we find if the final test was two weeks later?

Once again: we just don’t know.

For the time being, I don’t think this research creates emphatic teaching guidelines. We simply have too many important questions to let our practice change much based on this study.

We should, of course, keep our eyes out for further exploration of this topic.

If anything, I’d suggest this strategy. If you have a student or two who take an unusually long time to learn something, you might check in with them the next day to see how well those memories have consolidated.

This suggestion is, of course, speculation; I’m not insisting that all readers adopt it. However, it seems to me the most plausible application of potentially important research.

NEXT
Prior Knowledge: Building the Right Floor