Don’t “Ignore the Man Behind the Curtain”

Today’s post is a bit more informal and personal than usual. 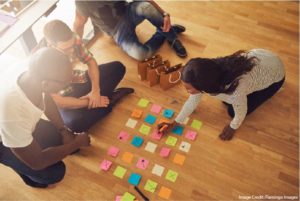 first started attending Learning and the Brain conferences in 2008, I looked at the presenters as Speakers of Truth from a Platform of Verity.

They KNEW THINGS. They had DONE RESEARCH.

I wasn’t there to ask questions. I was there to write down what they told me.

Over the last ten years, I’ve learned to think differently about the relationship between research and understanding. Research always begins as a cheerfully contentious conversation among competing theories.

Can people pay attention for more than 10 minutes? Researchers argue about that.

Does retrieval practice have limits? Researchers argue about that.

Is Mindset a thing? Researchers argue about that A LOT.

I’m also gradually learning to think differently about researchers themselves.

In the past, they struck me as distant, awe-inspiring figures. They were busy, out questing for truth.

And yet, I’m learning how eager many researchers are to connect with teachers.

In the last two weeks, I have sent emails to six different researchers, asking them questions about the classroom implications of their work.

To be clear: I’ve never met any of these researchers. I’ve certainly never had the chance to do anything for them. I was, in other words, a total stranger asking a question out of the blue.

You know what? Five of those six have responded; three of them responded in about 2 hours. (I’m still hoping to hear from #6.)

In fact, they all responded substantively and enthusiastically. They liked my questions, had specific suggestions, and pointed me to other articles to check out.

They didn’t see my question as an intrusion, but as an invitation to a teaching conversation they were glad to join.

I’m not naming these researchers here because I don’t want them to be swamped with email. But I do hope you feel as encouraged as I do. If you’ve got a question about the study you just read — for example, how best to make it work in your classroom — you just might reach out to the study’s author.

NEXT
Vital Resources in Psychology: the Best Research f...