“Doing Science” or “Being a Scientist”: What Words Motivate Students? 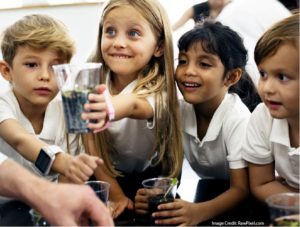 One recent example: a research team in New York explored the difference between “being a scientist” and “doing science.”

The first phrasing — “being a scientist” — might imply that scientist is a kind of fixed, exclusive identity. In the same way that dogs are dogs and can’t also be cats, so too young children might infer that people who are artists or athletes or authors can’t also be scientists.

The second phrasing — “doing science” — might clear away that rigidity. This classroom exercise is something we’re all doing. It doesn’t have immediate identity implications one way or another.

If this simple switch in phrasing helps motivate students, that would be the least expensive, least time-consuming intervention EVAH.

Half of the teachers (62) saw a training video that modeled specific language: “Today we are going to do science! The first part of doing science is observing with our senses.”

The other half (68) saw a similar video that didn’t include such modeling. (Researchers assumed that most teachers — without clear modeling — would using phrasing about ‘being a scientist’ rather than ‘doing science.’ Indeed, that’s what happened.)

A few days later, these pre-K students had the chance to play a tablet-based video game that resembled their science experiment. The game was programmed in such a way that all students got the first round right (success!) and the second round wrong (struggle!).

So, how long did these children persist after struggle? And: did the “doing science” vs. “being a scientist” language matter?

Sure enough, students in the “do science” lessons persisted longer than those in the the “be a scientist” lessons.

That is: when teachers spoke of science an action we take, not an identity that we have (or don’t have), this subtle linguistic shift motivated to students to keep going longer.

The effects, although statistically significant, were quite small.

Students in the “do science” lessons were 6% likelier to continue after they got one question wrong. And they were 4% likelier to keep going three problems later. (You read that right: six percent, and four percent.)

We might read these results and throw our hands up in exasperation. “Six percent! Who cares?”

My answer is: we ought to care. Here’s why.

Students experienced this linguistic change exactly once. It cost nothing to enact. It took no time whatsover. Unlike so many educational interventions — pricey and time consuming — this one leaves our scarcest resources intact.

Now: imagine the effect if students heard this language more than once. What if they heard it every time their teacher talked with them about science. (Or, art. Or, creativity. Or, math. Or, any of those things that feel like ‘identities’ rather than ‘activities.’)

We don’t (yet) have research to answer those questions. But it seems entirely plausible that this FREE intervention could have increasingly substantial impact over a student’s school career.

In two ways, this research reminds me of Mindset Theory.

First: Dweck’s work has taken quite a drubbing in recent months. In some some social media circles, it’s fashionable to look down on this research — especially because “the effects are so small.”

But, again: if one short mindset intervention (that is FREE and takes NO TIME) produces any effect — even a very small effect — that’s good news. Presumably we can repeat it often enough to make a greater difference over time.

I’m not arguing that promoting a growth mindset will change everything. I am arguing that even small boosts in motivation — especially motivation in schools — should be treasured, not mocked.

Second: this research rhymes with Mindset Theory. Although the researchers didn’t measure the students’ mindsets — and certainly didn’t measure any potential change in mindset — the underlying theory fits well with Dweck’s work.

That is: people who have a fixed mindset typically interpret success or failure to result from identity: I am (or am not) a “math person,” and that’s why I succeeded (or failed).

People with a growth mindset typically interpret success or failure to result from the quality of work that was done. If I work effectively, I get good results; if I don’t, I don’t.

So: this study considered students who heard that they should think about science as an identity (“being a scientist”) or as a kind of mental work (“doing science”). The results line up neatly with mindset predictions.

Second: encouraging students to “do this work” rather than “be this kind of person” can have motivational benefits.

Third: small changes in student motivation might not seem super impressive in the short term. But, if they add up over time, they might be well worth the very small investment needed to create them.

One Response to “Doing Science” or “Being a Scientist”: What Words Motivate Students?

NEXT
Transcend: The New Science of Self-Actualization b...