If we want our students to think creatively, should they listen to music? If yes, does the timing matter? 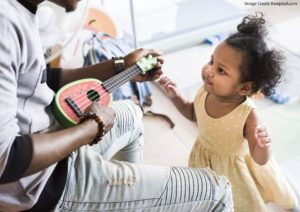 Intuition might lead us either to a “yes” or to a “no.”

Yes: music might get students’ creative juices flowing. Especially if it’s upbeat, energetic, and particularly creative in itself, music might spark parallel creativity in our students’ thought processes.

No: on the other hand, music just might be a serious distraction. Students might focus so keenly on the music — or on trying to ignore the music — that they can’t focus on the creative work before them.

Do You Smell a CRAT?

Researcher Emma Threadgold used a common creativity test – with the unlikely acronym of CRAT – to answer this question.

Here’s how a CRAT works:

You have to think of another word that – when combined with each of those words – produces a real word or phrase.

To solve a CRAT, you have to rifle through your word bank and try all sorts of combinations before – AHA! – you pull the correct answer up from the depths of your brain.

In this case, the correct answer is “sun”: as in, sundress, sundial, and sunflower.

The Results Are In

Threadgold and her team tested this creativity question several times, in order to explore several variables.

They played music with English lyrics, with foreign lyrics, and with no lyrics. They played upbeat, happy music.

They even played library noise – with the sound of a photocopier thrown in for good measure.

In every case, music made it harder to solve CRAT problems.

To put that in stark terms: music interfered with listeners’ creative thinking.

(For those of your interested in statistics, the Cohen’s d values here are astonishing. In one of the three studies, the difference between music and no music clocked in a d=2.86. That’s easily the highest d value I’ve seen in a psychology study. We’re typically impressed by a value above 0.67.)

Having done such an admirably thorough study, has Threadgold’s team answered this question for good?

As always, teachers should look not for one definitive study, but for several findings that point in the same direction.

And, we should also look for boundary conditions. This research might hold up for these particular circumstances. But: what other circumstances might apply?

For me, one obvious answer stands out: timing.

Other researchers have studied creativity by playing music before the creative task, not during it.

For instance, this study by Schellenberg found that upbeat music produces higher degrees of creativity in Canadian undergraduates AND in Japanese five-year-olds. (Unsurprisingly, the five-year-olds were especially creative after they sang songs themselves.)

In this study, crucially, they listened to the music before, not during, the task.

Doubtless you can think of other related questions worth exploring.

Do people who learn to play music evince higher degrees of creativity in other tasks?

How about courses in music composition?

Does this effect vary by age, by culture, by the kind of music being played?

For the time being, based on what I know about human attention systems, this study persuades me that playing music during the creative task is likely to be distracting.

Depending on what you want your students to do, you might investigate other essential variables.

On a related topic: for Dan Willingham’s thoughts on listening to music while studying, click here.

NEXT
A Handy Summary of Memory Definitions, for Teacher...