If mindfulness programs work as intended, teachers and schools can help students center their attention and lower their stress. 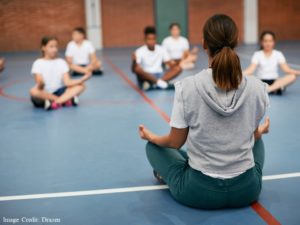 We’ve got suggestive research indicating that, when done properly, such programs can improve wellbeing.

What’s not to love?

Although I’ve linked to suggestive research above, this field does have a research problem.

And, their study designs aren’t often persuasive. (The topic of “study design” gets technical quickly. The simplest version is: to say that “research shows this” convincingly, a study needs to check A LOT of boxes. Not many mindfulness studies do.)

So, we’d love a study with LOTS of people. And, we’d like a really good study design.

With a pre-registered study design.

In this study, researchers paired similar schools: for example, two large schools, located in Wales, with similar socio-economic makeup, and so forth.

One school in that pair got a 10-week curriculum in School Based Mindfulness Training. School teachers ran these sessions, which included mindfulness exercises and home practice and so forth.

The other school in the pair continued the SEL work that they were doing. (Researchers evaluated the extant SEL programs to ensure they were good quality.)

So: did the Mindfulness training benefit students more that ongoing SEL work?

What Researchers Measured; What They Found

This research team measured three primary outcomes: risk for depression, social-emotional functioning (with a “Strengths and Difficulties Questionnaire”), and well-being.

And, believe it or not, they measure twenty-eight secondary outcomes: executive function, drug and alcohol use, anxiety, and so forth.

Did the students who got the mindfulness training show statistically significant differences compared to those who got the “teaching as usual” SEL training?

The researchers themselves had been optimistic. In the reserved language of research, they write:

Our premise was that skills in attention and social-emotional-behavioral self-regulation underpin mental health and well-being across the full spectrum of well being.

“Skills in attention and social-emotional-behavioral self-regulation” sounds A LOT like mindfulness, doesn’t it?

Their review of earlier research, and their own pilot study, showed a “promise of effectiveness.” But, they designed and ran this 2-year-8000-student study to be sure.

They write that they “found no evidence that [school based mindfulness training] was superior to [teaching as usual]” one year after the training was over.

In the primary outcomes, they found no differences for depression, well-being, and social-emotional function.

In the secondary outcomes, in fact, they found students in the mindfulness group had slightly worse results in five categories:

These differences weren’t large, but they certainly don’t suggest that mindfulness training is better that other SEL programs.

Any study including 8000+ people, and measuring 30+ variables (!), will result in LOTS of details, and lots of questions about methodology.

These points jump out at me:

First: these researchers have done an impressively thorough job.

Reasonable people will push back on their findings. But this research team has obviously taken extraordinary care, and provided an immense amount of information for others to examine. (Check out their website.)

Second: I’ve traditionally been skeptical of “teaching as usual” control groups. Here’s why:

Some teachers got a shiny new thing: mindfulness training! Other teachers got nothing: the SEL curriculum they’ve been doing all along.

However, in this case, the new thing DIDN’T produce better results. The results, basically, were identical.

Third: although 43 schools added mindfulness programs, more than half of them continued with the SEL training they were already doing.

That is, we’re not exactly comparing mindfulness to other SEL approaches. Some schools did only mindfulness; others did only SEL; others offered a blend of both.

Would the mindfulness programs produce better results if they replaced the SEL programs rather than combined with them? We don’t know.

On reason might be: most students just didn’t do the mindfulness exercises consistently.

On a 0-5 scale, students on average rated their mindfulness practice as 0.83. As in, less than 1. As in, they simply didn’t practice much mindfulness.

Would these programs work if they took place in school, so students practiced more mindfulness? We don’t know.

This well designed study — including more than 8000 participants — strongly suggests that mindfulness training doesn’t produce more (or fewer) benefits than other SEL approaches.

This research doesn’t suggest we must cancel the programs we have. However, it pushes back against the argument that mindfulness provides distinct advantages, and that all responsible schools must adopt such programs immediately.

As long a schools tend responsibly to their students’ social-emotional needs, a variety of approaches can work equally well.

2 Responses to Does Mindfulness Help? A Blockbuster New Study

NEXT
Test Anxiety: How and When Does It Harm Students?