Do Classroom Decorations Distract Students? A Story in 4 Parts… 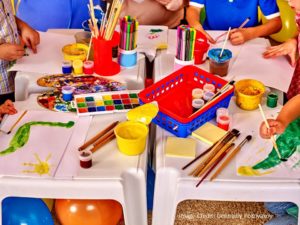 You know the look.

We certainly hope that these decorations invite our students in and invigorate their learning. (We might even have heard that “enriched environments promote learning.”)

At the same time, we might worry that all those decorations could distract our students from important cognitive work.

So, which is it? Do decorations distract or inspire? Do they promote learning or inhibit learning? If only we had research on this question…

But wait: we DO have research on this objection.

Back in 2014, a team led by Dr. Anna Fisher asked if classroom decorations might be “Too Much of a Good Thing.”

They worked with Kindergarten students, and found that — sure enough — students who learned in highly-decorated rooms paid less attention and learned less than others in “sparsely” decorated classroom.

Since then, other researchers have measured students’ performance on specific mental tasks in busy environments, or in plain environments.

It seems that we have a “brain-based” answer to our question:

Classroom decorations can indeed be “too much of a good thing.”

Taken too far, they distract students from learning.

But wait just one minute…

When I present this research in schools, I find that teachers have a very plausible question.

Sure: those decorations might distract students at first. But, surely the students get used to them.

Decorations might make learning a bit harder at first. But ultimately students WON’T be so distracted, and they WILL feel welcomed, delighted, and inspired.

In this theory, a small short-term problem might well turn into a substantial long-term benefit.

And I have to be honest: that’s a plausible hypothesis.

Given Fisher’s research (and that of other scholars), I think the burden of proof is on people who say that decorations are not distracting. But I don’t have specific research to contradict those objections.

I’ve got good news: they just did.

In a recently-published study, another research team (including Fisher, and led by Dr. Karrie Godwin, who helped in the 2014 study) wondered if students would get used to the highly decorated classrooms.

Research isn’t research if we don’t use fancy terminology, so they studied “habituation.” As in: did students habituate to the highly decorated classrooms?

In the first half of their study, researchers again worked with Kindergarteners. Students spent five classes studying science topics in plainly decorated classrooms. (The visual material focused only on the topic being presented.)

Unsurprisingly (based on the 2014 study), students were more distractable in the decorated classroom.

But: did they get used to the decorations? Did they become less distractable over time? Did they habituate?

The answer: a little bit.

This 2-week study with kindergarteners, I think, gives us valuable information.

We might have hoped that students will get used to decorations, and so benefit from their welcoming uplift (but not be harmed by their cognitive cost). So far, this study deflates that hope.

Team Godwin wanted to answer that question too. They ran yet another study in primary school classrooms.

This study had somewhat different parameters (the research nitty-gritty gets quite detailed). But the headline is: this study lasted 15 weeks.

Depending on the school system you’re in, that’s between one-third and one-half of a school year.

How much did the students habituate to the visual distractions?

The answer: not at all.

The distraction rate was the same after fifteen weeks as it was at the beginning of the year.

To my mind, that’s an AMAZING research finding.

At this point, I think we have a compelling research story.

Despite our training — and, perhaps, despite our love of decoration — we have a substantial body of research suggesting that over-decorated classrooms interfere with learning.

The precise definition of “over-decorated” might take some time to sort out. And, the practical problems of putting up/taking down relevant learning supports deserves thought and sympathetic exploration.

However: we shouldn’t simply hope away the concern that young students can be distracted by the environment.

And we shouldn’t trust that they’ll get used to the busy environment.

Instead, we should deliberately create environments that welcome students, inspire students, and help students concentrate and learn.

8 Responses to Do Classroom Decorations Distract Students? A Story in 4 Parts…

PREVIOUS
Why Time is a Teacher’s Greatest Commodity&#...

NEXT
Perspectives on Critical Thinking: Can We Teach It...