Multiple-choice tests have a bad reputation. They’re easy to grade, but otherwise seem…well…hard to defend. 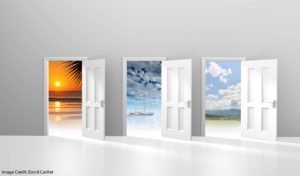 After all, the answer is RIGHT THERE. How could the student possibly get it wrong?

Given that undeniable objection, could multiple-choice tests possibly be good for learning?

The Benefits of Distraction

“Who was George Washington’s Vice President?”

In this case, none of the distractors could possibly be true. However, I could ask the same question a different way:

“Who was George Washington’s Vice President?”

In THIS case, each of the distractors could reasonably have held that role. In fact, all three worked closely with–and deeply admired–Washington. Two of the three did serve as vice presidents. (And the other was killed by a VP.)

Why would the plausibility of the distractor matter?

We know from the study of retrieval practice that pulling information out of my brain benefits memory more than repeatedly putting information into it.

If the distractors are implausible, a student doesn’t have to think much to figure out the correct answer. No retrieval required.

But, if the distractors are plausible, then the student has to think about each one to get the answer right. That’s lots of retrieval right there.

In other words: plausible distractors encourage retrieval practice, and thereby might enhance learning.

This line of reasoning leads to an even more delicious possibility.

To answer that question about Washington’s VP, the student had to think about four people: Adams, Jefferson, Hamilton, Madison.

Presumably she’ll learn the information about Adams–who was the correct answer to the question.

Will she also learn more about the other three choices? That is: will she be likelier to answer a question about Alexander Hamilton correctly? (“Who created the first US National Bank as Washington’s Secretary of the Treasury?”)

If the answer to that question is YES, then one multiple-choice question can help students consolidate learning about several different facts or concepts.

And, according to recent research, the answer is indeed YES.

The research paradigm used to explore this question requires lots of complex details, and goes beyond the scope of a blog post. If you’re interested, check out the link above.

If this research holds up, we might well have found a surprisingly powerful tool to help students acquire lots of factual knowledge.

a) are easy to grade

PREVIOUS
Aware: The Science and Practice of Presence–...