Can Creativity Be Taught? What’s the Formula? 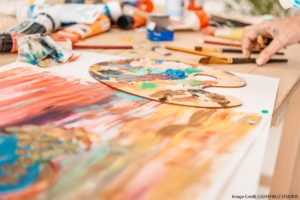 My edutwitter feed has a lively debate about this question: can we teach people to be creative?

This round started with a post by David Didau, summarizing a debate between himself and Paul Carney.

Didau believes (oversimplifying here) that creativity is an emergent phenomenon, resulting from a knowledge-rich curriculum.

When people know lots o’ stuff, they are increasingly able to come up with new and useful combinations of that stuff. And, that’s how we typically define “creativity”: new & useful.

On the contrary, Carney believes that creativity can — in fact, must — be taught directly. For instance, he believes that helping students visualize complex patterns can help them see information in new ways.

That is, one teachable skill leads to greater creativity in general.

Tom Sherrington weighs in on this debate, and (creatively) adds his own twist.

Although he doesn’t think creativity can be taught, he does think it can be fostered. In fact, he’s got a formula for fostering it. Here goes:

Unsurprisingly, the K in Sherrington’s formula is “knowledge.” I’ll let you read his article to explore the other two key variables.

As an added bonus, you’ll get to see a Francis-Bacon-inspired portrait of Sherrington’s son, painted by Sherrington’s daughter. I don’t doubt you’ll be impressed by the creativity on display…

PREVIOUS
Why Do Teachers Resist Research? And, Why Should W...