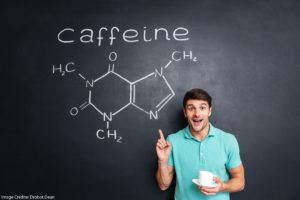 I’ve posted about the learning benefits of wine and of chocolate. Today — to complete the trifecta — I’ve found research into the benefits of caffeine.

(You can thank me with a cup of java later.)

Caffeine and Cognition: The Simple Study

This study could not have been simpler. Researchers had students lie quietly in an fMRI scanner in a caffeine-free state on one day. After 48 hours, the same students took a caffeine pill and repeated the scan.

(Just to be sure that order didn’t matter, half of the students took the pill first for the first scan. The other half took the pill for the second scan.)

Caffeine and Cognition: The Complicated Results

After they took the caffeine pill, the students had more good brain stuff.

In this case, the good brain stuff was “brain entropy.”

What’s that? According to this study, the

concept of brain entropy has been defined as the number of neural states a given brain can access.

That’s an especially tempting hypothesis because caffeine increases brain entropy in the pre-frontal cortex. You hear a lot about the PFC and Learning and the Brain conferences, because so many important cognitive and self-regulatory functions use those networks.

At present, this study points in the direction of that tempting hypothesis. But, it doesn’t directly support it.

We need lots more testing to confirm this idea.

In fact, the whole concept of “brain entropy” is still in its early stages, and we need to investigate the fully idea before we reach strong conclusions based upon it.

So: ponder brain entropy while you’re drinking your next cup of joe. You’ve got lots to consider.

NEXT
Concerned about Concussions: Athletes and Actors