But Does It Work In The Classroom? (A Hint: YES!) 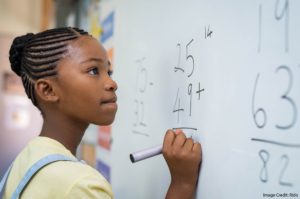 Teachers who follow brain research have probably heard of “interleaving.”

This teaching strategy encourages us to mix up different kinds of practice problems, rather than sort them tidily into distinct bunches.

Imagine, for instance, that your math curriculum includes these four units:

B: calculating the area of circles

I might be tempted to have have my students review graphing one night. The next night, they would focus on circles. The next, they would simplify expressions. And so forth. (Researchers call this “blocking.”)

Or, I could have them practice all four skills each night. (“Interleaving.”)

So, does blocking or interleaving help students learn better?

One Useful (but Incomplete) Answer

We have “known” the answer to this question for a long time.

The answer is: interleaving. By a lot.

When students interleave while practicing, they learn information more durably.

However, the verb “know” is in quotation marks above because we “know” that answer in a very particular setting.

The best-known research of interleaving took place in a college psychology lab.

Students learned formulas to calculate the volumes of irregular solids. Those who interleaved practice did better on a quiz two weeks later than those who blocked.

To be clear: this is a great study. (I always show it when I talk about interleaving with teachers. The graphs get gasps — really!)

But: does interleaving work for K-12 students? Does it work for anything other than irregular solids?

And, crucially: does it work beyond 2 weeks? We want our students to remember for months — even years. Two weeks is nice, but…we’re actually curious about much longer periods of time.

A Second (Much More Complete) Answer

And, the test covered quite different topics — the four listed at the top of this post: graphing lines, calculating areas, simplifying expressions, solving inequalities.

And, get this: the study lasted for several MONTHS. From the first interleaved practice set to the final test was something like 145 days.

The results: the students who interleaved remembered more than those who blocked. By a lot.

(If you’re statsy, you’ll be impressed to know that the Cohen’s d averaged 0.68. For an intervention that costs basically nothing, that’s HUGE.)

In addition to these data, Rohrer &  Co. gathered information from an anonymous teacher survey.

They got lots of good news. For instance:

11 said they could use interleaving without changing the way they usually teach.

12 said other teachers can do it with little or no instruction.

Why Does Interleaving Work?

Second, think for a minute about blocking. If students do practice problems that all require the same strategy (aka, blocking), then they have to execute that strategy. But, as Rohrer points out:

“Interleaved practice requires students to choose a strategy and not merely execute a strategy.”

This additional level of desirable difficulty requires students to practice selecting strategies: an essential part of using learning in the real world.

It probably has less of an effect over shorter periods of time. That is: you’ll see bigger results on chapter tests and year-end assignments than on weekly quizzes.

Crucially: students probably need a little blocked practice early on to get hold of a topic or concept. We shouldn’t start interleaving while initially explaining an idea.

But, the headlines focus on great news.

Interleaving works with real students in real classrooms. It’s easy to add to our teaching habits. It costs almost nothing. And: it genuinely helps students learn.

NEXT
Constructivism: In The Brain, In The Classroom