According to this new study, bilinguals learn new languages faster than monolinguals.

To reach this conclusion, this research looked at brain wave signatures as participants learned an artificial language. 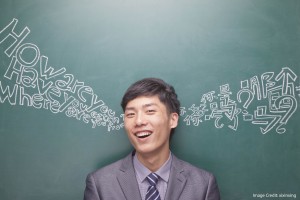 (Understanding electroencephalogram research is always tricky. Don’t feel bad if you’re not totally clear on what a P600 might be.)

The short version is this. As they learned this new language, neural patterns for  bilinguals resembled native speaker patterns relatively quickly. Those patterns for the monolinguals developed more slowly.

We can’t be sure that this finding extrapolates to the real world. After all, this particular artificial language has only 13 words in it–four nouns, two adjectives, two adverbs, and so forth.

However, the study does tentatively support a widely-believed conclusion: the hardest language to learn is the second…

(By the way: we’ve posted about the potential benefits and detriments of bilingual education several times in the last year. You can click on “bilingual education” in the tags list on the right to see other articles.)

NEXT
Beware: Too Much Structure Hinders Creativity (for...