An Exciting Event in Mindfulness Research

Let’s imagine a GREAT study on the benefits of mindfulness.

As school people, we’re happy that mindfulness might be helpful at home or at work, but we really want it to be helpful to students. So, we’d love for this study to take place at school. 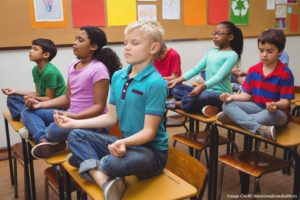 We’d like the study to show that mindfulness changes mental processes. For instance, we’d love to know that it helps students feel less stress.

And, we’d like the research to look at brains as well as minds. That is: we’d like to have some fMRI data showing relevant changes in brain regions.

Finally, the study’s methodology would hold up to scrutiny. It would, for instance, include a plausible control group. (I’ve written about problems with control groups, including this study about mindfulness.)

Sure enough, this study exists!

Working with 6th graders at a school outside Boston, Clemens Bauer randomly assigned half to a mindfulness program and half to a coding training program.

Both groups devoted 45 minutes, four times a week to this effort, for 8 weeks. And, by the way, students in both groups enjoyed this time equally. (So: AT LAST we’ve got a plausible and active control group.)

Bauer’s team had students fill out a stress survey before and after this 8-week stretch. (Sample question: “In the last month, how often have you been upset because of something that happened unexpectedly?”)

And, he performed fMRI scans on them before and after as well.

When looking at those scans, Bauer’s team had a specific prediction. High stress responses typically includes elevated amygdala activation. Often, we can manage that stress response by using the prefrontal cortex–the part of the brain right behind your forehead.

If mindfulness helps manage stress, we would expect to see…

…greater connectivity between the prefrontal cortex and the amygdala, and

…concomitantly reduced activity in the amygdala.

That is, we’d be able to see that mindfulness strengthened connections between self-control systems in the prefrontal cortex. In turn, this increase in self-control would help mitigate stress responses in the amygdala.

Of course, I’m offering a very simplified version of a fantastically complex neural story. Books have been written on these connections, and it’s not blog-friendly kind of information.

If you’re a fan of mindfulness, you’re going to LOVE these results.

Students who practiced mindfulness reported less stress than those in the control group.

They showed higher levels of prefrontal cortex connectivity with the amygdala.

They showed lower levels of amygdala activity when they looked at angry faces.

So: both in their mental activity (reported stress level) and in the neural activity (in the amygdala, between the amygdala and the prefrontal cortex), eight weeks of mindfulness led to beneficial results for these students.

First: to repeat, this study is powerful and persuasive. We can simply revel in its conclusions for a while.

Second: as teachers, we’re glad that student stress levels are lower. The next question is: do students learn more? We can assume they do, but we should measure as well. (To be clear: I think lower stress is an important goal on its own, whether or not it leads to more learning.)

Third: as the study’s authors acknowledge, the sample size here is relatively small. I hope they get funding to repeat it on a much larger scale.

As noted in this study, there’s a disappointing history in the world of mindfulness research. Small studies–often lacking random assignment or a control group–come to promising conclusions. But, the bigger the study–and the better the methodology–the smaller the results.

So: now that we’ve gotten strong effects with a randomized study and a plausible control group, I hope to see these same results at a much larger scale.

I might go sit quietly for a while, and try to clear my mind of extraneous thoughts.

* This sentence has been revised to read “neural modulation” rather than “neural behavior.” (9/18/19)

3 Responses to An Exciting Event in Mindfulness Research

PREVIOUS
Brain Words: How the Science of Reading Informs Te...

NEXT
Why, and When, Does Music Interfere with Reading?