Anyone who works with teenagers — teachers and parents — wonders about the mystery of adolescent self-control.

At times, they prove capable of magnificent cognitive accomplishment. 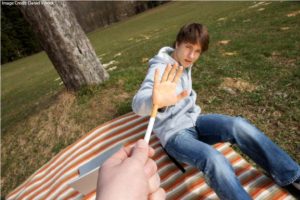 (A high-school junior I taught once composed a new soliloquy for Hamlet. Speaking of Claudius — the uncle who murdered Hamlet’s own father — Hamlet says: “My unfather unfathered me.” I think the Bard himself envies that line.)

And, at other times, they baffle us with their extraordinary foolishness.

(At the next Learning and the Brain conference, ask me about the teens who kidnapped a teacher’s dog as a gesture of respect and affection.)

How do we make sense of this puzzle?

Catherine Insel, working as part of Leah Somerville’s lab, wondered if teens recognize the difference between high stakes and low stakes. Better said: she wanted to know if they behaved differently in those distinct settings.

That’s a kind of self-control.

You might predict that adolescents would be more careful when the stakes were higher. That is, their score would be better when a WHOLE DOLLAR was on the line.

But: nope. That’s not what happened.

In the age groups from 13-18, they did equally well on low- and high-stakes tasks. Only the 19- and 20-year-olds were measurably better at high-stakes than low-stakes.

In particular, they focused on two brain areas.

The pre-frontal cortex — the part of the brain just behind the forehead — helps manage “higher” brain processes, such as inhibition.

The striatum — deep in the center of the brain — is a key part of the “reward network,” and influences motivation and decision-making.

(By the way, almost ALL brain regions — including the pre-frontal cortex and the striatum — participate in MANY different brain functions.)

They found that the connection between these regions matures over time.

That is, the self-control functions of the pre-frontal cortex are increasingly able to manage the reward networks of the striatum.

Insel’s research shows not only THAT teens don’t effectively distinguish between high- and low-stakes; it helps explain WHY they don’t: the appropriate brain networks haven’t fully matured.

This research suggests that high-stakes testing just might not be developmentally appropriate for this age group.

After all: adults recognize the importance of high-stakes work. We know to prepare for job interviews differently than we do for daily meetings. We know to be on our best behavior when we meet potential future in-laws; perhaps we relax a bit once they’re actual in-laws.

Teens, however, just don’t recognize that distinction as well.

In other words: if you needed another reason to downplay high-stakes testing, Insel and Somerville’s research provides just that.

If you’re particularly interesting in this topic, we’ve posted about it frequently on this blog.

Here’s a link to Somerville’s work, in which she explores the boundaries between adolescence ad adulthood.

Here’s a Ted-talk by Sarah-Jayne Blakemore exploring the mysteries of adolescence.

Richard Cash is running an LatB Workshop specifically on self-regulation. You can check it out here. And, I’m running a Learning and the Brain workshop on teaching adolescents in April. Click here if you’re interested in learning more.

NEXT
Homework Improves Conscientiousness: Do You Believ...