Here’s a vital question: How can we help young students learn math better? 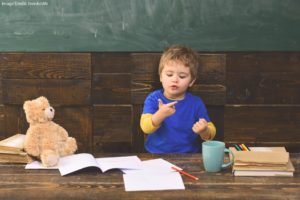 Researchers in Germany wondered if movement might help kindergarteners understand the basic principles of a number line.

Does this kind of bodily movement help children think about numbers and math?

The specific application of this principle will depend on you and your students. But, to get the conversation started, we can say:

Having kindergarteners manipulate a number line by moving left and right helped them understand some basic math better.

I’ve seen lots of enthusiasm lately about movement in classrooms. While I’m all in favor of allowing — even encouraging movement — I think we need to be precise and careful about the arguments for doing so.

Remember, earlier research had showed the importance of the number line. The researchers weren’t testing movement just because movement seemed cool. They tested it because the physical reality of a number line makes this idea so plausible.

Imagine, instead, that the study methodology described above were used to teach students about colors.

Of course, unlike the number line, colors aren’t an especially spatial concept. So, it’s not obvious that this same teaching technique would have benefits for this kind of learning goal.

To be clear: my point is not that movement is a bad idea. Instead, we should understand clearly why this movement will benefit these students while they learn this topic.

Maybe you’ve seen thoughtful research showing that students did better learning parts of speech (say) when they did hand gestures along with them.

In each of these cases, you’ve got a good reason to incorporate movement into the lesson plan. We should not, however, default to a sweeping statement that students must move to learn.

Your own teaching (and learning) experiences may show that — at times — quiet, motionless concentration create the very best learning environment.

PREVIOUS
Sorting Hats, Myers-Briggs, and the Perils of Fals...