10,000 People Talk About Sleep and Cognition

Most of the research studies I read include a few tens of people. Sixty or eighty is good; more than 100 is rare. I’ve seen published studies with an even dozen. 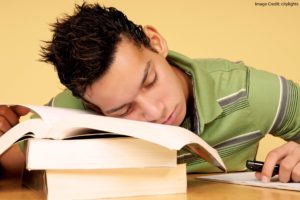 So when I hear about a study with over 10,000 participants, I sit up and take notice.

In this case, researchers in Canada asked people to fill out online surveys about sleep, and to take cognitive tests. Given their astonishing data pool, they can reach firm conclusions about the questions they’ve asked.

Some of these conclusions will sound quite predictable. Others will surprise you. They certainly surprised me.

First, if you want optimal cognitive function, roughly 7-8 hours of sleep gives you the best results. (Assuming that “you” are an average person. Of course, not everyone is average.)

Second, that number doesn’t change with age. (See below for an important caveat.) That is: 30-year-olds and 80-year-olds think best with the same amount of sleep.

Third, too much sleep muddles cognition as much as too little sleep. As someone who likes sleeping, I’m sorry to say this but: the graphs don’t lie.

Of course, school requires A LOT of reasoning and verbal skill. No wonder sleep-deprived (or sleep-surfeited) students struggle.

And, sixth, a good night of sleep really does help. That is: people who got even one good night’s sleep before the test saw a measurable uptick in their cognitive performance.

From a researcher’s standpoint, it’s important to note that this team didn’t draw on a random sample. These participants volunteered by coming to a particular website.

From a teacher’s standpoint, we should note the age cut-off for this study: 18 years. K-12 students might see similar patterns. That is: their short-term memory might be fine after low-sleep nights, while their reasoning and verbal skills suffer.

In my experience as a high-school teacher, my colleagues (and I) experienced sleep deprivation as much as our students did.

We should, of course, encourage our students to get enough sleep. (We should also schedule the class day to fit our students’ sleep cycles.)

Now that we’ve seen this research into the connection between sleep and cognition, we should also take better care of ourselves.

PREVIOUS
Inventing Ourselves: The Secret Life of the Teenag...

NEXT
US vs UK: Edutwitter Styles