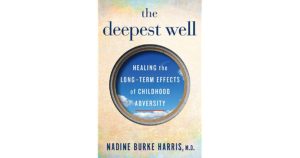 Nadine Burke Harris explains that she wrote The Deepest Well: Healing the Long-Term Effects of Childhood Adversities to help parent and caregivers provide their children with the best opportunity in life, even when they face difficulties. This book is a critical, and eye-opening read for those invested in supporting the health and education of young people. As Harris chronicles her own career as a researcher, pediatric clinician, and founder and CEO of the Center for Youth Wellness in San Francisco, she leads the reader through her process of discovering that childhood adversities cause profound and lasting changes in the body and that adverse childhood experiences (ACEs) are widespread and transmitted from one generation to the next. Using her own successes at the Center for Youth Wellness as an example and with suggestions for future efforts, she advocates for a public health response that includes prevention of adverse childhood experiences and quick and sensitive screenings for ACEs in conjunction with a medical and mental health response for treating the psychological and physical effects of trauma. While we need to learn more about how to recover from adversities, six factors we know to be helpful are sleep, mental health, healthy relationships, exercise, nutrition, and mindfulness.

Early in her career, Harris researched the biochemical basis of stress in tadpoles, finding that exposure to stress-related corticosterone early in development inhibited growth and decreased health. Later, when she was served as a pediatrician in a community facing poverty, discrimination, and other hardships, she noticed a similar pattern in her young patients. She explains that the stress response can be beneficial, even lifesaving, in instances that call for acute stress. However, when the stress response is activated intensely for a prolonged period, it damages health. A study conducted in 1985 showed that the more exposure adults had before they were 18 to emotional, physical, or sexual abuse and violence, physical ,or emotional neglect, substance abuse or mental illness, divorce, or criminal behavior, the worse their immune system, heart health, and cancer risk. ACEs have neurological, hormonal, and immunological consequences. People who have experienced six or more of these ACEs have a life expectancy that is 20 years shorter than people who have experienced none. Among kids, exposure to four or more of the ACEs is associated with 32 times increased likelihood of being diagnosed with a learning or behavioral problem. Indeed, ACEs are at the root of many issues in public education.

Harris carefully and deliberately explains that toxic stress can be experienced by anyone. Communities of color and communities facing poverty are more likely to be in a constant state of arousal resulting in more trauma symptoms. What biological research shows, however, is that everyone is equally susceptible to the health effects of trauma when adversity strikes, and everyone is equally in need of help when that happens.

What does Harris propose can be done to prevent and mitigate the ill effects of ACEs? When children have safe, stable, and nurturing caregivers, even if the children are exposed to stressful or dangerous communities, these caregivers can act as an epigenetic force buffering against cellular aging and other adverse effects of trauma. A focus on prevention through caring adults is much more effective than treating the effects of trauma after it has occurred. Nonetheless, treatment is important. While talking about ACEs may feel taboo, universally screening all patients for the number of ACEs they have suffered should be standard practice. Mental health services should be available as part of the primary care clinicians’ practice to make receiving these services easy. Exercise and nutrition can help improve brain functioning and the immune system. Sleep and mindfulness promote the healing of a dysregulate stress response.

Today 39 states and the District of Columbia collect data about ACEs. These data have revealed that more than half of the population has at least one ACE and at least thirteen percent have four or more. Harris notes that many have experienced positive effects of adversity—e.g., developing greater empathy or the ability to persevere.  While she accepts that this is true, and has even experienced that in her own life, she reminds the reader that we should not make character judgments of people who react poorly in the face of adversity. Given the prevalence of ACEs, Harris makes a compelling case for continuing to pursue more advanced ways to treat the health sequela of them. This powerful book concludes with the ACE questionnaire, so that readers can determine their own ACE score or that of the children for whom they care.

PREVIOUS
Advice: It Is Better to Give than Receive

NEXT
When Introverts Act Like Extraverts (and Vice Vers...