The Science Of Homework: Why Timing is Everything 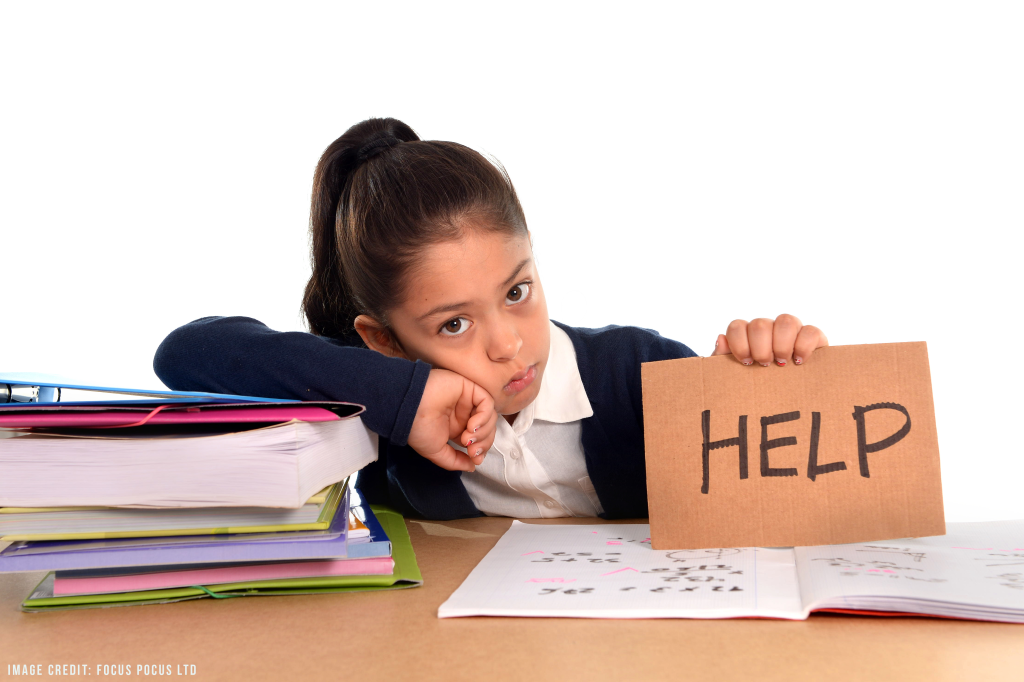 A previous article argued, paradoxically, that remembering can cause forgetting. Today’s entry reverses the paradox: forgetting, you see, benefits remembering.

You read that right: if you want to remember, it helps to forget.

Today in class, I taught my students a new verb tense (or a new technique for proving that lines are parallel, or the Ideal Gas Law). I’ve got twenty practice problems for them to do: what’s the best schedule for those problems?

When I learned French (and Geometry, and Chemistry) in high school, the answer was clear: do all the practicing right now. Whatever I studied in class today, I should practice tonight. In other words, I did those 20 practice problems then night after I learned the new material.

There is, of course, another conceptual option: I could ask my students to spread that practice out over time. They could do five problems tonight, and five tomorrow night, and so on.

Either plan seems plausible: which was is better? Happily, teachers don’t have to guess—we can look at research.

Here’s an example2. Hal Pashler’s research team had students come to his lab to learn an unusual math procedure, and practice it by doing 10 problems. A week later, half of those students returned to take a quiz on this procedure; the other half of the students took the same quiz…a MONTH later.

Then, Pasher had another group of students learn the same unusual math procedure—which they practiced by doing 5 problems (not ten, five). They all returned a week later, and did five more practice problems. A week later, half of those students returned to take the quiz; the other half of the students, again, took that quiz a month later.

So, both groups studied the same procedure, and did ten practice problems. The only difference: the schedule on which they did that practicing. Half of them did all the practice at once; the others spread their practice out.

Which group did better? 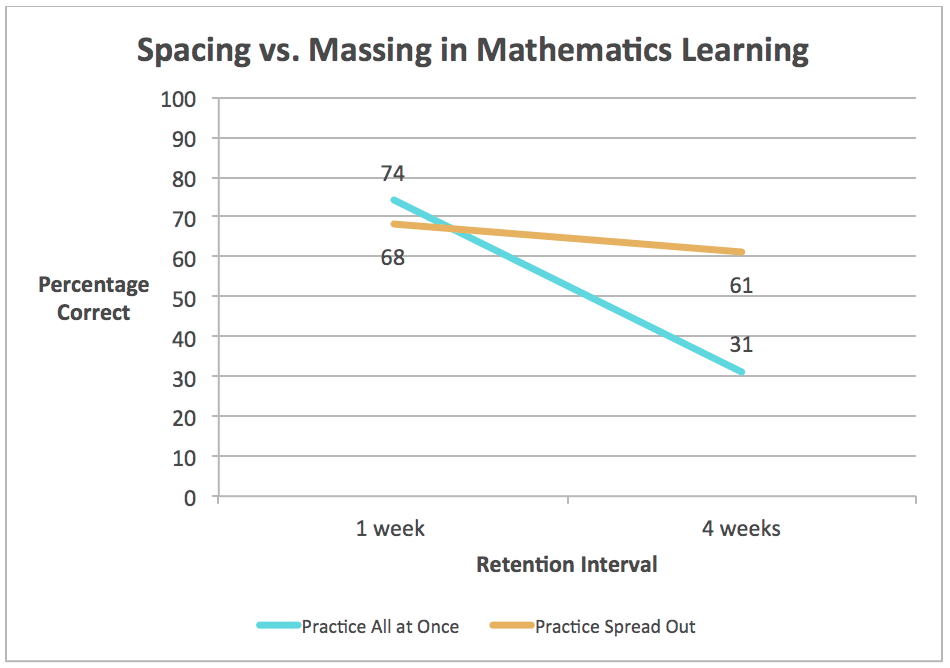 To put that picture into fewer than a thousand words: by spreading their study out, the second group remembered twice as much as the first group did.

Why did this technique work? Simply put, the second group had time to forget. The first group spent all their time learning. The second group learned, and then forgot, and then learned again. The forgetting benefitted ultimate remembering.

Two serious problems, however, might interfere with our ability to put this research result to practice.

To help students see the benefits of spacing their practice, I regularly show them Pasher’s study. Students LOVE the idea that they can double the amount they remember (61%, instead of 31%) without doing any more practice problems.

Although “The Spacing Effect” sounds like a good idea when I think about any one topic, it leads to a potential problem with my syllabus. In the old days, I’d teach one topic on Monday, and then have my students practice that topic Monday night. On Tuesday we’d do the next topic, and they’d practice it on Tuesday night. In short, my syllabus looked like this:

However, if spread my practice out—perhaps by doing 5 problems per topic each night—my new syllabus will look like this:

The result: Thursday’s homework is a mess. It seems entirely possible that Spacing benefits learning when you do it with one topic in the psychology lab, but that—when teachers try it in the classroom—the muddled syllabus might undermine all the benefits that Spacing should provide. In brief: Spacing Good, Muddling Bad.

Researcher Doug Rohrer has investigated this question, and here’s what he found3.

You can see that the first group looks like my first syllabus: nicely organized; the second group looks like Thursday night on my second syllabus: a jumbled muddle. (Rohrer, more politely, calls this second structure “interleaved.”)

When it came to the practice problems, as I feared, the students in the jumbled group didn’t do very well: they got 60% of the problems right, compared to 88% in the traditionally organized group.

However, what happened when Rohrer’s groups came back two weeks later to take a test? The jumbled group, once again, remembered about 60%. The traditionally organized group remembered 20%. 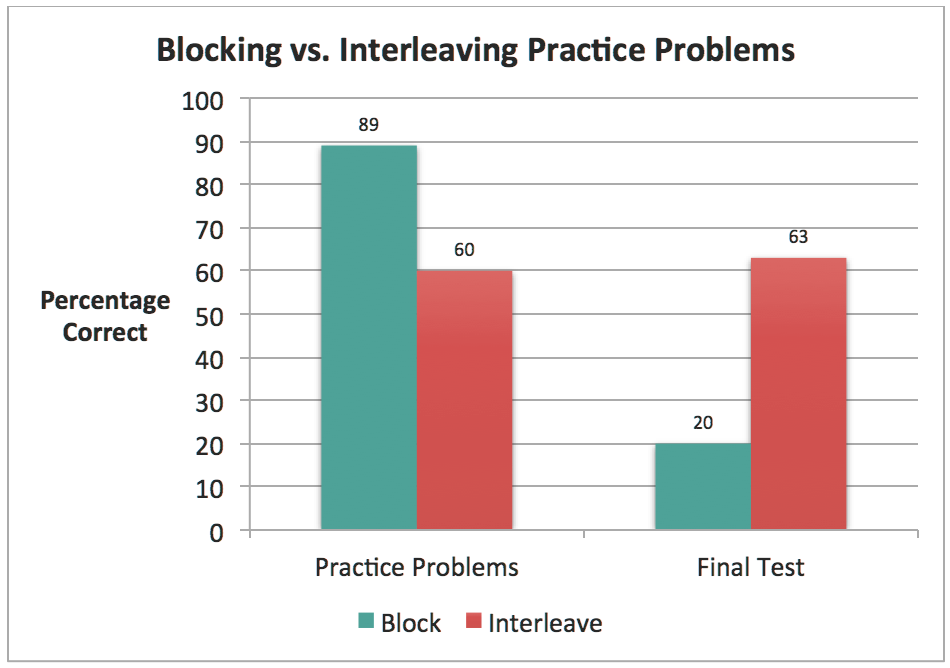 Why did that happen?

First: Rohrer’s first group learned the four math procedures, but they didn’t practice deciding when to use each one. Because their practice problems always aligned with the technique they had just practiced, they never had to figure out when to use which one. So, two weeks later, they struggled to know which equation to use.

A final note about research. The “Spacing Effect” is very well documented, and at this point is not controversial. The benefits of interleaving, however, have been shown by fewer studies; and some of the studies with high-school aged students have been equivocal1. But this much is clear; the combination of spacing & interleaving leads to more learning than the traditional syllabus.

Because, as you now remember, forgetting can help you learn.

2 Responses to The Science Of Homework: Why Timing is Everything

PREVIOUS
Bilingualism & the Brain: The Lifelong Benefi...
NEXT
Should the rise in preterm birth impact education?