Possible Selves in STEM: Helping Students See Themselves as Scientists

Why don’t more students sign up for STEM classes, and enter STEM careers? 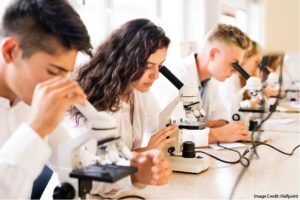 Could we increase the number, and the diversity within that group?

Researchers in California came up with a simple strategy: one that offered powerful results.

This research team, let by Jeffry Schinske, wondered if students avoided science classes because they simply couldn’t see themselves as scientists.

To push back against this false belief, Schinske’s team tried a straightforward strategy. Their biology students learned not only from a textbook, but also from primary sources. By learning course information from a broadly diverse range of scientists, these students expanded their sense of who scientists might be.

That is: they might learn about neurobiology by studying the work of Dr. Ben Barres. In this way, students learned about diseases of the nervous system and about trans scientists. (If you’re interested in Barres’s remarkable story, we introduced him on this blog a few years ago.)

They didn’t learn about biology concepts as a series of abstract truths. Instead, they learned about these topics through the people (Black or White or Asian or Hispanic; gay or straight; cis or trans; on the spectrum; funny or serious) who investigate them.

In other words: Schinske’s team wanted to increase their students’ sense of possible selves by showing scientists who resembled them.

Sure enough, this strategy worked. A few key findings.

Compared to students in an active control condition, students who did this “Scientist Spotlight” homework…

… felt they could individually relate to scientists as people like themselves (and felt that way for at least 6 months),

Because of the study design, not all these findings are causal. That is, Shinske doesn’t claim that the Scientist Spotlight caused the higher grades.

But, it’s an intriguing possibility — especially because it doesn’t take additional time for either students or teachers.

In Their Own Words

More than most research, this study includes passages from surveys that the students completed. The students’ own words helpfully communicate the power of this technique. For instance,

For my whole life I … wasn’t exposed to any scientist who was of African American descent. That, as a fellow African American, brought me joy as it shows that African Americans are no longer abiding to the negative stigma we have. She’s representing a powerful positing for us and  people have noticed her work. It gave me incentive to push for my own dreams and to succeed.

I found this Ted Talk with Charles Limb incredibly interesting mostly because I am a musician myself who has been trained both classically and in jazz.

Before I learned about scientists in this class, I thought scientists were like “nerds” or what they show in movies. The characters would be very geeky, had glasses, spoke monotone, and thought they were above everyone. However, through all the research I’ve done in this class, scientists are just normal people like myself. They love to learn new things, they have a life outside the laboratory, they are fun … My opinion of people who do science has completely changed thanks to this class.

Clearly, this strategy strongly influenced these (and many other) students.

If you try this out with your own scientists, please let me know what you find!

NEXT
How Learning Happens: Seminal Works in Educational...