Music and Memory: A Learning Strategy?

Ever since the “Mozart Effect” was debunked, teachers have wanted to understand the relationship between music and learning. 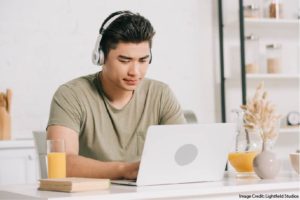 If simply listening to music doesn’t “make us smarter” in some abstract way, can we use music strategically to help us learn specific subjects or topics?

A group of researchers at Baylor University wondered if the key is sleep.

That is: if students learn a topic while listening to (quiet) music, and then listen to that same music while they sleep, will it cause the brain to replay the academic content associated with the music? And, will that replay help students learn?

This technique — called “targeted memory reactivation” — has been studied before. But, most of that research uses odors to reactivate memories.

That is: students learn X with the scent of roses in the background. That night while they sleep, the scent of roses is piped into the room. When they’re tested the next day — voila! — they remember more X than the students who didn’t get the “targeted memory reactivation” at night.

Of course, using odors for such reactivation is interesting in sleep labs. But it might not be very practical for the rest of us. So, researchers wondered if music would also reactivate memories.

So: students’ brains associated the music — Beethoven, Vivaldi, Chopin — with the topic — economics.

That night, while they slept, half of the students heard that same music played again. The other half heard white noise instead. The music/white noise started once students entered a particular phase of sleep, called “slow wave sleep.” (In this case, slow wave sleep began about 35 minutes after they fell asleep.)

Would they be able to apply its principles better?

Might there be a gender difference in those results?

So: what effect did Beethoven have?

Sure enough, targeted memory reactivation had interesting and measurable effects.

First: the next morning, students who heard music at night were likelier to “pass” a quiz (by scoring 70%) than those who didn’t.

These results get SUPER technical. But the headline is: we can quite plausibly connect mental behaviors (answers to quizzes) to neurobiological behaviors (“theta power”).

Fourth (This is really important): Researchers found NO DIFFERENCES when they tested the students nine months later. So, this targeted memory reactivation (with music) produced a short-term difference, but not a long-term one.

Implications for Teaching and Learning

This musical version of targeted memory reactivation feels temptingly practical. But: trying it out in real life requires some extrapolation and some technology.

I briefly corresponded with the lead researcher, Michael Scullin, about translating this technique from the sleep lab to everyday life. Here’s a quick overview of key points:

PROBLEM: In this study, students heard the music as they first learned the material. But, it’s REALLY unlikely that teachers/professors will play music while they teach. So, how can we apply use targeted memory reactivation in a more typical learning situation?

However, this approach probably won’t work if students are otherwise distracted — by cellphones or video games, say — while they study.

PROBLEM: Presumably I can’t use the same piece of music to reactivate all memories of all the academic topics I want to learn. Does that mean I have to build some huge library of music cues: this Beethoven piece to recall the Battle of Bunker Hill, that Chopin piece to practice balancing chemical equations?

SOLUTION: Alas, it’s true: each piece of music would be distinctively paired with a particular topic. (This conclusion hasn’t been tested, but is likely true.)

So, the best compromise is probably this: choose the topics that are most difficult to understand or remember, and use the technique sparingly for that subset of academic information.

PROBLEM: Won’t playing music at night keep students awake, or wake them up?

SOLUTION: That’s an important technical question. Ideally, the music would play quietly.  And, as we saw in the research described above, it would start only after slow wave sleep started.

So, whatever technology the students have, they should program it to start the music at very low levels — ideally starting about 30 minutes after they fall asleep.

QUESTION: The technique helped in the short term, but not nine months later. Can we use targeted memory reactivation to consolidate learning over the long term?

ANSWER: We haven’t tested that yet. It seems plausible (even likely?) that repeating the music over time would help. That is: listening to that music once a fortnight for a few months might really firm up memories.

But, again, that approach hasn’t been tested. I (Andrew Watson, not Michael Scullin) am speculating that it might work. But we don’t know.

This research — contrary to lots of earlier work — suggests that we might be able to learn while we sleep.

But, the specifics are very much in the early days. Targeted memory reactivation clearly produces benefits in the sleep lab. Its application to everyday teaching and learning needs to be explored, practiced, and refined.

I wrote about another one of Scullin’s studies a year ago. If you’d like some advice on how to fall asleep faster, click here.

PREVIOUS
How Do Children Explain Academic Success? (And: Ho...

NEXT
Unbearable Irony: When Dunning-Kruger Bites Back&#...