At one of the first Learning and the Brain conferences I attended, a speaker briefly mentioned that learning styles theory doesn’t have much good evidence to support it. 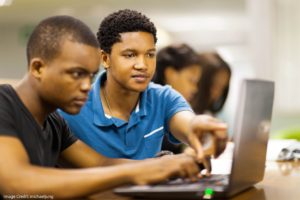 When I got in the elevator at the end of that session, I heard one attendee curtly dismiss the speaker’s objection: “well, it’s all just statistics.”

Well, it IS all statistics.

In the worlds of neuroscience and psychology, researchers rely on statistical methods to ensure their recommendations aren’t simply hunches.

Anyone can stand behind a microphone and have an opinion. But: if you’re going to do scientific research, your numbers have to add up.

And, as researchers look at valid statistical models, they just don’t find good support for the idea that — for instance — some people are visual learners and others are auditory learners.

The numbers just don’t add up. Or, in this case: if you teach “visual learners” “visually,” they don’t learn any more than if you had taught them “auditorily” or “kinesthetically.”

Instead, the content itself often offers guidance on the best way to teach. If you’re teaching a French or Spanish or Japanese accent, that content is — by its nature — auditory.

Most content, however, can be taught in multiple ways.

For example: I’m thinking of an actress. She’s Australian. She played Virginia Woolf in that movie. And, she was married to Tom Cruise.

If you’re shouting NICOLE KIDMAN, you’re right. Notice that I gave you three entry points to the neural network that encodes this memory: her country of origin, a role she played, and her marriage.

So: “teaching to learning styles” helps because you probably teach your content in different ways — auditorily, visually, and kinesthetically. Those three different approaches give distinct connections to the memory you want your students to form.

This approach to teaching helps not because of a student’s learning style, but because all your students now have multiple ways to access that memory.

In other words, the theory helps students learn — but not for the reason it claims to.

Daniel Willingham — one of the early debunkers of learning styles myths — has recently posted his current thoughts on learning styles. The short version:

Learners should “tune their thinking to the task.” That is: learn about geography visually — even if you think you’re not a “visual learner.”

More than many researchers, Willingham gets teachers and teaching. So: if you’re still a learning-styles believer, I encourage you to check out his article.

And: the Learning Scientists have a great take on this debate. We shouldn’t focus simply on rejecting learning styles theory. Instead, we should replace it with a better theory. They have thoughts on how to do so…

Finally, Scientific American has a recent article showing that most students don’t use the learning styles that they believe would benefit them. And, when they do, those strategies don’t help them learn.

PREVIOUS
The Power of Different: The Link Between Disorder ...

NEXT
Conflicting Advice: Mind-Wandering Is Bad, or Just...