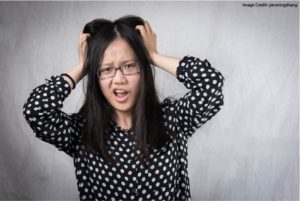 The moody sulkiness that erupts into warmth and affection. The impressive academic accomplishment that precedes an idiotic, immature decision.

(How often have you had this conversation:

YOU: What on earth were you thinking?

Of course, teenagers often baffle themselves. And according to recent research, some of that confusion may result from difficulty understanding their own emotions.

Researchers who study emotions often focus on our ability to distinguish among them.

For instance: when I see a picture of rotting food, I might be disgusted and upset. However, I’m not angry or scared.

To understand adolescent emotion, we might ask: how good are teens at emotion differentiation?

Are they better at it than children? Than adults? In other words, how does this capacity develop over time?

Erik Nook recently investigated this question, and came up with an intriguing answer.

He and his colleagues showed people (age range 5 to 24) pictures, and asked them to rate their emotional responses to them. Focusing on negative emotions, Nook asked participants how “angry, upset, sad, disgusted, and scared” each picture made them.

For example: if a participant gave the highest rating to all five emotions, that response pattern showed little emotional differentiation. All five emotions were experienced equally.

If, however, he gave a high rating to “scared,” a medium rating to “disgusted,” and a low rating to the other three, that pattern showed high emotional differentiation.

Children and adults distinguish among emotions better than adolescents do.

That is: children and adults can say “I’m feeling upset, but not scared.” Adolescents, however, have a harder time drawing those distinctions. Their negative emotions swirl together in a chaotic muddle.

But why is this so?

It turns out that children are good at distinguishing among emotions because they don’t really understand it’s possible to experience more than one emotion at a time.

In other words: young children report that they’re feeling disgusted but not sad because they don’t recognize it’s possible to feel both disgusted and sad.

Adolescents, however, DO recognize the possibility of feeling multiple emotions. And yet, because this understanding arrives freshly with adolescence, teens don’t yet have much practice differentiating among them.

As Nook and colleagues write:

Adolescents, however, fall between these two stools. They do recognize the possibility of experience multiple emotions, but don’t yet have enough practice at sorting out which is which.

As so often happens, this research guides us in two directions. Teachers should both think this way and do this thing.

Think this way. With this clearer understanding of adolescent emotion, we can clear our own heads when we cross paths with a teen in an emotional tasmanian-devil vortex.

Rather than say to ourselves “why is this 17-year-old melting down like a child?,” we can say “Aha! He’s aware that he’s experiencing multiple emotions, but he’s not sure which is which. That confusion has led to an atypical emotional outburst.”

This simple understanding may help us stay calm despite adolescent angst.

Do this thing. Adolescents know that they’re feeling many things, but they don’t yet have much experience naming them simultaneously. We can help them.

In the emotional moment itself, we can ask guiding questions and offer potential labels. As always, teacherly guidance can show teens the way in difficult moments.

Also, in our teaching, we can highlight moments of emotional complexity. In Their Eyes Were Watching God, does Janie admire Jody Starks, or hate him? Fear him, or pity him? Perhaps, all at the same time?

In this way, the curriculum that we teach can help adolescents develop emotion differentiation.

First: we’ve written about work from Leah Somerville’s lab before. If you want to know more about adolescence, look here or here.

Second: one of the co-authors of this study is Stephanie Sasse, one-time editor of this blog. Congratulations!

PREVIOUS
The Best Way to Take Notes: More Feisty Debate
NEXT
Putting Research to Work in the Classroom: Success...