On the Bright Side: The Science of Good Stress 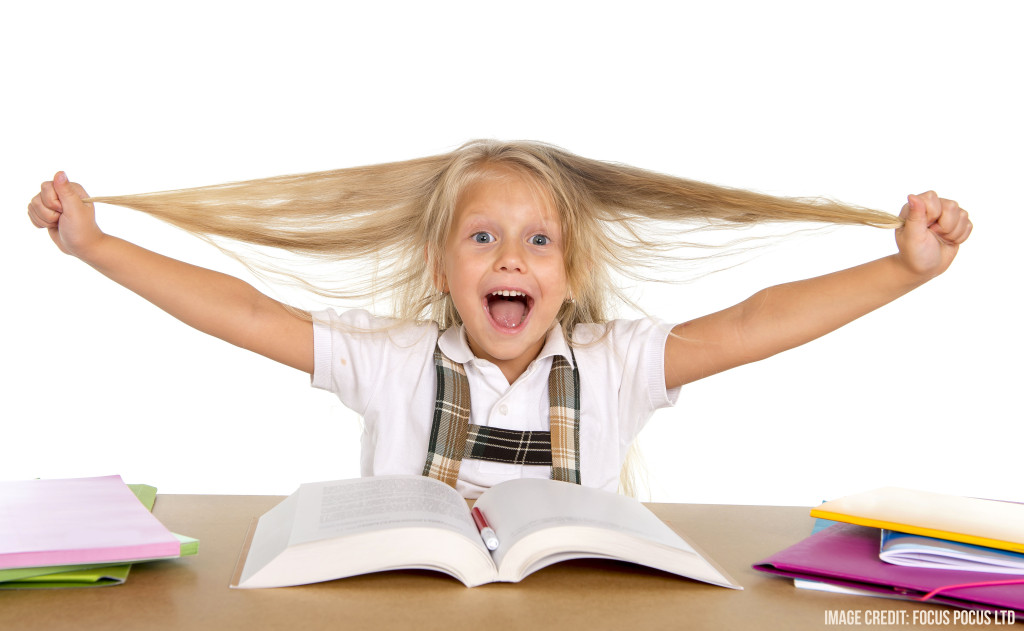 A Google image search for “stress” makes our culture’s attitude about the concept immediately clear. There are pictures of people pulling their hair, eyes wide and mouth gaping, a word cloud filled with words like “worry” and “depression,” and even a woman intensely biting her laptop.

In short, we hate stress.

Although it is often an unpleasant feeling and is linked to a host of health problems from headaches to Alzheimer’s Disease, stress is not all bad. In some forms, it can motivate and push us to excel. We can reap these benefits by keeping stress under control, but another, less obvious way to harness stress productively is to reframe the way we think about it.

Although it might be easy to imagine children’s lives as carefree, students of all ages face stress. Whether from standardized testing1, non-ideal home situations like poverty2, or even being around others who are stressed3, children’s minds and bodies can become acquainted with stress and anxiety from a young age. When we become stressed, our brain becomes doused in norepinephrine, and our body receives a rush of adrenaline4. This sympathetic nervous system response is often referred to as our body’s fight-or-flight mode because the arousal it triggers will allow us to react quickly (by doing things like fighting or fleeing) in the face of immediate danger. The amygdala plays a crucial role in stimulating this often automatic physiological response to a threatening situation.5

This can be a beneficial response, for example, if we need to save a child from drowning or hammer our a paper right before a deadline. In these cases, stress is often referred to as eustress, because it positively affects our performance in the moment. It can also become a deleterious response if it becomes a lasting state, making our body feel like we may need to save a drowning child at any second, when in reality we are simply sitting in traffic on the highway. This is the type of stress we often think of – referred to as distress for its negative impacts on our mental wellbeing.

Stress in the Classroom

Prolonged stress compromises classroom performance. It produces dysfunction in the prefrontal cortex, a region of the brain necessary for high-level cognitive tasks like reasoning, decision-making, and memory. As such, long-term stress hurts a person’s working memory capacity6, a trait that is linked to different features of intelligence7. Although this working memory impairment is likely to be evident in the classroom, chronic childhood stress resulting from poverty or other adverse situations predicts working memory deficits as a young adult8.

Children and teenagers whose minds are preoccupied by stressful circumstances — whether in the of excessive pressure to perform, discord at home, or bullies at school — are less able to focus on their academic work. Since much of what we learn in school is cumulative, building on previous concepts that teachers assume that students have learned, we can see how the effects of stress on educational performance can quickly snowball into a situation that adds even more stress for the student.

Fortunately, there are many ways of coping with stress. One antidote that continues to gain traction is to cultivate mindfulness, an enhanced awareness of one’s surroundings and stressors. In particular, Mindfulness-Based Stress Reduction (MBSR) has proven effective for reducing both physical and psychological consequences of stress9. As previously discussed on Learning & the Brain, children can and should be taught to incorporate mindfulness and meditation into their lives.

Changing the Way We See Stress

Another effective method for dealing with stress that has received less popular attention than MBSR is reframing our mindset. Through a process known as reappraisal, we can alter the way we feel about a situation by altering the way we think about it.10 Focusing on the positive features of stress — for example, its ability to encourage the development of initiative, mental toughness, and a sense of mastery — can influence not only our subjective experiences of stress, but our body’s physical responses to it as well11. If the idea of stress stresses us out, it can become an endless feedback loop. If we can come to terms with the time and place for stress in our lives, it may actually be easier to keep under control.

In one study by Alia Crum and colleagues, employees of a large company were exposed to three different 3-minute long videos over the course of a week. The three videos were different, but for each employee, all three either presented stress as an enhancing or debilitating force. By the end of the week, a questionnaire revealed that people changed their mindsets about stress. Those who saw the debilitating videos began to think of stress as more negative, while those who saw the enhancing videos began to think of it more positively. Further, people in the enhancing group reported better psychological symptoms and work performance after the week, which did not happen for the debilitating group. These findings suggest that changing the way people think of stress can have important downstream consequences for their mental well-being and performance.

A follow up study investigated the effect of stress mindsets in undergraduates. At the beginning of the semester, students completed a personality assessment, and later in the semester, they provided saliva samples. During a subsequent class, they were asked to rate themselves on dimensions including confidence, emotional intelligence, persuasion, and presence/authenticity, and to prepare a speech in ten minutes that they could deliver to the class. They were told that 5 students would be randomly selected to deliver their speeches, and their classmates would rate them on their charisma. This setup created a realistic stressful situation for the students, and saliva samples were again collected to compare to the baseline samples taken earlier. The students also learned that those who were chosen would have the opportunity to receive feedback from professionals, and those who weren’t chosen could also receive feedback on their speeches at a later time. All students rated their desire for feedback. Students whose personality assessments revealed that they had a “stress is enhancing” mindset were more likely to desire feedback than those who thought of stress as debilitating. The students who believed stress could be enhancing also showed more adaptive cortisol profiles in their saliva.

Implications for the Classroom

Believing that stress could be positive encouraged students to put themselves in a position to grow by expressing more willingness to receive feedback. Beyond influencing behavior, this mindset also affected students’ physiological responses to a stressful situation, allowing them to be less reactive than students who held the “stress is debilitating” mindset. Together with the previous study, these results demonstrate first that our mindsets about stress are malleable, and can be shaped simply by watching a few short movies. They also show us that students who took on a more positive mindset about stress reacted less to acute stress and put themselves in a situation to receive valuable feedback and grow from their experience. These are exactly the traits most educators would like to see more of in their students.

What steps can we take to help more students achieve these positive results?

Although all people will undoubtedly face some negative stress throughout their lives, being mindful to the way we react to all stress, physically and mentally, will help us cultivate more positive mindsets. Mindsets are often self-fulfilling prophecies, and the key to thriving under stress may simply lie in believing that we can do so.

PREVIOUS
The Upside of Your Dark Side: Why Being Your Whole...
NEXT
Messy Science: How to Prepare Students for the Rea...