A Field Guide to Lies: Critical Thinking in the Information Age by Daniel J. Levitin 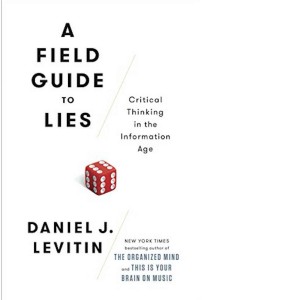 Never has it been so easy to acquire a breadth of information rapidly. At the same time there is a proliferation of misinformation and manipulative assertions. Information seekers must learn to be critical consumers. In A Field Guide to Lies: Critical Thinking in the Information Age Daniel J. Levitin suggests ways to evaluate claims that are made with numbers, words, and scientific logic. Levitin is the Dean of Social Science at the Minerva School and part of the faculty at UC Berkeley’s Hass School of Business. He is also the author of The Organized Mind.

Levitin warns that claims made with numbers often appear to the uncritical consumer as inarguably true. Critical consumers of numbers recognize that just because something is precise (i.e., specific) does not mean that it is accurate (i.e., true). He reminds his reader that statistics are created by people at every stage in the process. People determine what to count, how to count it, how to analyze what has been counted, and what to report. At each of these stages humans can intentionally or unintentionally manipulate numbers. Thus, critical consumers check whether statistics seem plausible using basic reasoning skills. For example, critical consumers know the differences among the various types of averages (i.e., mean, median, and mode), understand the relation among averages and range, and consider whether averages were calculated using a sensible sample. One can evaluate sampling by considering whether the sample was: 1) composed of sub-samples that ought not to be combined, 2) divided in such a way as to obscure a larger truth, and 3) representative. Levitin suggests that to be critical consumers of graphically presented data we ought to consider how axes are constructed and labeled (e.g., do they depict the full range of the data?). Critical consumers of numbers understand that correlations can be coincidental, explained by a third variable, or not practically important. They recognize that estimating a data point between existing pieces of data (interpolation) is not a perfect science and yet can often yield good estimates, while estimating a value outside the range of one’s data (extrapolation) can be riskier. Finally, and perhaps most critically, Levitin urges his readers not to be intimidated by numbers, not to accept them at face-value, and to test whether the numbers are plausible.

Levitin argues that humans learn from the stories and claims of other people. As such, in the information age, when it is easy for many people to make erroneous claims, we must be critical consumers of others’ words. Critical consumers of words evaluated alleged experts’ expertise. For example, they ask who determined that the expert was indeed an expert? Even if someone is an expert in one domain, the critical consumer questions whether the expert’s authority extends to the relevant domain at hand. The critical consumer recognizes that expertise is relative, experts can be wrong, and experts can disagree. Critical consumers know that some publications and websites are more reputable than others, and they seek out signs of the rigor with which claims in a given publication were verified or supported.

Science and the scientific method have proven invaluable in helping us determine what is or is not true about the world. Critical consumers must evaluate the way in which individuals discover truths and construct arguments. Levitin explains three different ways in which people typically come to understand how the world works. They can deduce by moving from general observations to specific predictions. They can induce by using a collection of facts to explain a general principle. Finally, as Sherlock Holmes often did, they can engage in abductive reasoning by using observations to construct a theory that accounts for those observations. Levitin enumerates several logical fallacies to help us become critical consumers who do not fall prey to those fallacies. For example, he helps the reader think about how to detect phenomena that may appear to be correlated. Levitin warns of the danger of not knowing what one does not know. In scientific and practical thinking, this can lead one to erroneous conclusions.

Levitin ends with four real-world instances in which he applied his suggestions about logical reasoning. He reminds us that we are fortunate to live in the information age because so much knowledge is available to us at all times. He argues that in exchange for the ease with which we can access information we must evaluate the information we encounter. Readers of A Field Guide to Lies will inoculate themselves from much of the deception they might encounter.

One Response to A Field Guide to Lies: Critical Thinking in the Information Age by Daniel J. Levitin

PREVIOUS
TOP RESEARCHERS TO EXPLORE WAYS TO EMPOWER AND ENG...

NEXT
On Average, the Average is Off